Showing posts from December, 2009
Show all

December 29, 2009
I just found an interesting short autobiography “THE LIFE STORY OF A GREEK PEDDLER – contributed by a Spartan now living in a suburb near New York City” . This story was published in 1906 as Chapter IV (pages 63-79) in a book titled “ The Stories of undistinguished Americans as told by themselves ”, which was developed from a series of articles previously published in the Independent . This is made available to you through the Harvard University Library online. The person telling this story is unnamed. He was born about 1866 “in a little hamlet among the mountains of Laconia in Greece. There were only about 200 people in this place, and they lived in stone huts or cottages…..” He gives a description of homes, how they made butter, wine, ground wheat and oats, and made clothing, farming, no need for currency, schooling, saint’s days and other holiday traditions, politics, superstition, the trip to the United States, the push cart business, and more. This is an interestin
3 comments
Read more

I hope everyone had a great Christmas. Now that the holidays are nearly over, I can try to catch up on some of my posts and website updates. Here’s a post that just came from the blogger at AnceStories: The Stories of My Ancestors – “ Citing Those Christmas Cards, Holiday E-mails, and Family Photos ”. This article is great for reminding us, once again, to check our Christmas Cards and Emails for family news and photographs. Then, how to cite them correctly in our genealogy software. Good luck with your Greek genealogy research. Georgia Keilman nee Stryker (Stratigakos) http://HellenicGenealogyGeek.com
1 comment
Read more 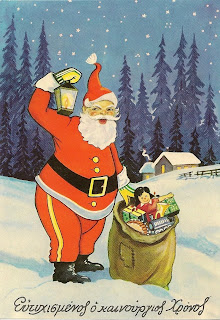 My yiayia saved most of the correspondence that she received from Greece. This is a Christmas post card that I believe was received sometime in the 1960’s. Don’t overlook this type of treasure – someone in your family might be the one that keeps all this old “stuff”. Luckily my mother and father were not the type to throw these out. This is another great source of information – Who sent it? Do they mention any other family members? What address was it sent from? The handwriting might be hard to decipher, but sit down with your Greek-English dictionary and the Greek handwriting samples on HellenicGenealogyGeek.com – give it a try. Good luck with your Greek family genealogy research. Georgia Keilman nee Stryker (Stratigakos) http://HellenicGenealogyGeek.com
Post a Comment
Read more

GREEK CULTURE AND TRADITIONS It’s the Christmas season so I thought you all would be interested in this excerpt from “The Greek News Agenda” online bulletin. “Christmas Elves” Kalikantzari are little creatures that live deep down inside the earth and together with the legends of Greece, play an important part in the customs and traditions of this holiday. From Christmas until the Feast of the Epiphany, residents in Epirus place twelve spindles in front of the fireplace so that the kalikantzari see them and do not climb down the chimney. On Christmas Eve, in the town of Grevena, the followers place a large log in the corner of the house and set it alight. As the fire burns, lasting until the Feast of the Epiphany, it protects the family from the kalikantzari. Good luck with your Greek family genealogy research. Georgia Keilman nee Stryker (Stratigakos) http://HellenicGenealogyGeek.com
Post a Comment
Read more

I recently had the blogger at “Abravanel – Jewish life and not only in Greece” forward me this link to a list of 693 people born in Greece who died during deportation from France during World War II. Good luck with your Greek family genealogy research. Georgia Keilman nee Stryker (Stratigakos) http://HellenicGenealogyGeek.com
2 comments
Read more

HISTORY OF GREEK SURNAMES The blog “ Greek Surnames ” is all about analyzing the history of words and Greek names. I have had a link to this blog on my HellenicGenealogyGeek.com website for quite awhile, but I think it is worth revisiting. The page is posted in the Greek language, however you can use the Google translator in the right hand column to translate into English or another language of choice. They claim to have analyzed 3,500 Greek surnames to-date. The latest posting includes: Irostratos Nikostratos Protessilaos Aeneas Arsinoi Archidams Alkifron Stentor (Stentoras) Dexileos Arhelaos Good luck with your Greek family genealogy research. Georgia Keilman nee Stryker (Stratigakos) http://HellenicGenealogyGeek.com A resource for Greek genealogy research
Post a Comment
Read more

December 03, 2009
Greek Surnames Do you have Greek ancestors who migrated to the United States or Canada but you can’t find them on any of the passenger ship indexes? Do you think you have tried all the alternate spellings when doing your searches? I ran across two great charts that have been put together by Familysearch.org Spelling Substitution Tables for the United States and Canada Commonly Misread Letters Table – this table shows how indexers and transcribers sometimes misread handwriting. When reading the chart you will see two columns – “Intended” (shows the actual spelling) – “Common Mistakes” (shows what the indexer or transcriber sometimes thought he or she saw) Phonetic Substitutes Table – The creator of the record sometimes misspelled the name in the original record because he or she misunderstood what the informant said. This happened very often when the informant came from another country (in our case, Greece). Also, many people were illiterate and did not know how to sp
Post a Comment
Read more

The Mechanism of Catastrophe - Turkish Pogrom of September 6-7, 1955, Destruction of Greek Community of Istanbul By Speros Vryonis, Jr. Published in 2005 by Greekworks.com – New York ---------------- This book mentions 785 different people of Greek descent – too many to include in this blog posting – but you can view them on the HellenicGenealogyGeek.com website page for this book “The Mechanism of Catastrophe”. You can view the following on the page below: Table of Contents Synopsis from the dust jacket ---------------- As usual, I hope some of you can find this information useful. Good luck with your Greek family genealogy research. Don’t forget you can work with your local librarian to get a copy of this book through inter-library loan, purchase a brand new copy through the publisher’s website at Greekworks.com , or purchase a used copy through a place like http://abebooks.com Georgia Keilman nee Stryker (Stratigakos) http://HellenicGenealogyGeek.com ----------------- TABLE OF C
1 comment
Read more
More posts