Showing posts from August, 2021
Show all

Origins of a Delicious Legacy: Candy Kitchen and the Canelakes' Journey 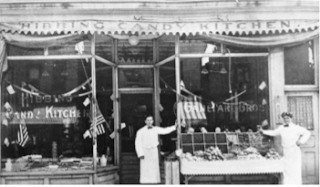 Hibbing Candy Kitchen Virginia Candy Kitchen ORIGINS OF A DELICIOUS LEGACY: CANDY KITCHENS & THE CANELAKES' JOURNEY By Jim Froemming Published in The National Herald July 24, 2021   The National Herald has given HellenicGenealogyGeek.com permission to post articles that are of interest to our group --------------------------------------------  Starting around 1890, many Greeks, mainly single men, and many in their teens, left their villages in the Peloponnese region of Greece to find opportunity in America. They were poor farmers and shepherds, and America needed laborers at its railroads, mines, and mills for its growing economy. This is a story about four Greek brothers who came to America from the village of Sykea and decided to become confectioners (candy makers) instead.  The Canelake brothers came to America from a poor village in Greece as teenagers and soon became successful confectionery merchants on the Iron Range of Minnesota. They opened the Virginia Candy Kitchen i
Post a Comment
Read more
More posts