Showing posts from September, 2019
Show all

MAKRONISSOS DIGITAL MUSEUM -  https://www.makronissos.org/en/ From 1947 until 1961 the island of Makronissos was used as a space of confinement and exile for over 40.000 Greek citizens who were discriminated by the anti-communist State for their political beliefs. The ASKI Digital Museum offers a unique insight in the exile experience illustrating the everyday conditions, the politics of repression, and the traumatic legacies of this important  chapter in the lenghty history of state-organized persecution. The establishment and operation of a military compound on Makronissos marked an upturn in conditions of exile existing at the time: an uninhabited area would be “settled” exclusively by exiles, citizens and soldiers, to be “rehabilitated” through an unprecedented programme of propaganda, psychological warfare, and physical and mental torture. The plan had two aims – the professed goal of reinstating the prisoners to the “healthy national body” and a second, undeclared,
1 comment
Read more 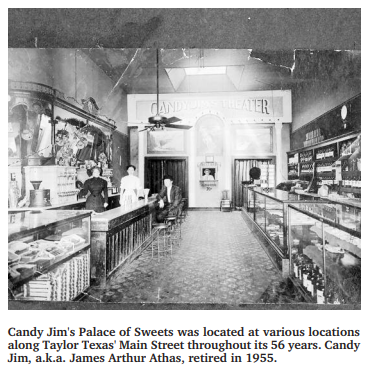 CANDY JIM'S PALACE OF SWEETS by Steve Frangos Published in The National Herald - August 17, 2019 ------------------------------ I am excited that  The National Herald  has given Hellenic Genealogy Geek the right to reprint articles that may be of interest to our group.  ------------------------------ CHICAGO - For fifty-six years, Candy Jim's Palace of Sweets was located at various locations along Taylor Texas' Main Street. When Candy Jim, a.k.a. James Arthur Athas retired in 1955, newspapers from New York, Indiana, Illinois, Washington, Wisconsin, Texas, and elsewhere carried the news of his retirement under the headline, Sweet Success. Athas should be remembered not only as the much beloved small town Greek immigrant candyman but also for bringing the latest in developing cultural art forms to his rural Texas community. Candy Jim Athas is nothing less than one of the very first pioneering movie theater proprietors in North America.  James
1 comment
Read more 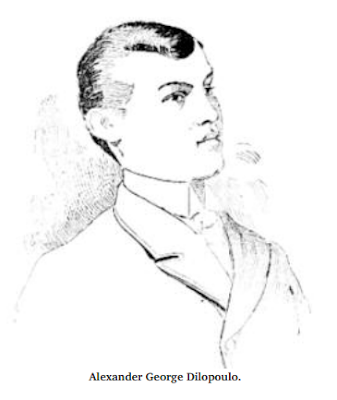 THE DILOPOULO BROTHERS  AND EARLY AMERICAN ENTERTAINMENT by Steve Frangos Published in The National Herald - August 24, 2019 ------------------------------ I am excited that  The National Herald  has given Hellenic Genealogy Geek the right to reprint articles that may be of interest to our group.  ------------------------------ Among the various Greek performers and promoters of the 1890s and 1900s, George and Alexander Dilopoulo regularly appeared on stages all across North America and beyond. Consequently, these two brothers have exceedingly complicated histories. Both men could speak a number of languages and through marriage were affiliated with merchants who attended the flurry of world fairs that took place between 1893 through at least 1933. Yet unlike the majority of newly arriving Greeks to American shores the Dilopoulo family did not hail from the Peloponnese or one of the many Greek islands. Various news accounts and census records attest that
1 comment
Read more

DEMETRIOS IS NOW JIMMY  Problems and Pitfalls Translating Proper Names by Basil Zafiriou Published in The National Herald September 2, 2019 ------------------------------ I am excited that  The National Herald  has given Hellenic Genealogy Geek the right to reprint articles that may be of interest to our group.  ------------------------------ Demetrios Is Now Jimmy is the title of a book by Lazar Odzak that traces the experience of Greek immigrants in the Southern United States during the early 1900s. The desire to adapt to and be accepted by the dominant society led many of these early immigrants to Americanize their names. Hence the title of the book. At the time, it was common to change surnames as well as first names. That is now rare, but anglicizing first names is still the norm. The way this is done leads often to odd results. Consider the mutation of Demetrios to Jimmy. Jimmy is a diminutive form of James, which in Greek is Iakovos.
Post a Comment
Read more
More posts