Showing posts from July, 2020
Show all

After a long-awaited 105 years, the Ethnikos Kirix/National Herald digital archive will be available to the public for free thanks to the generous grant of the Stavros Niarchos Foundation.  As the longest continuously printed Greek-language daily newspaper outside of Greece, this Archive will offer Greeks and Philhellenes alike a newspaper database to research our Community’s rich history. Researchers will able to track its incredible growth and evolution, decade after decade, and read about the fascinating and moving challenges, struggles and triumphs of our Greek immigrant friends and family.  With just a few keystrokes and a couple of clicks, members of our Community will be able to search for their families’ histories in America and beyond.  The history of Hellenism in the United States, as well as around the world, has been printed in the Greek language on the pages of the National Herald from the day of its foundation on April 2, 1915 and in the English language from October 18,
Post a Comment
Read more 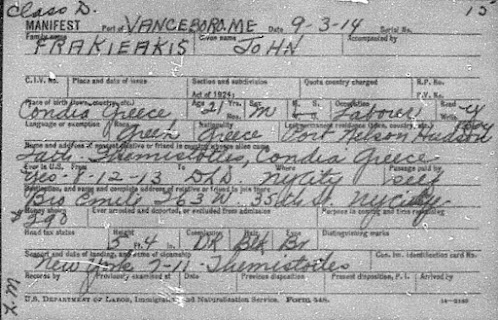 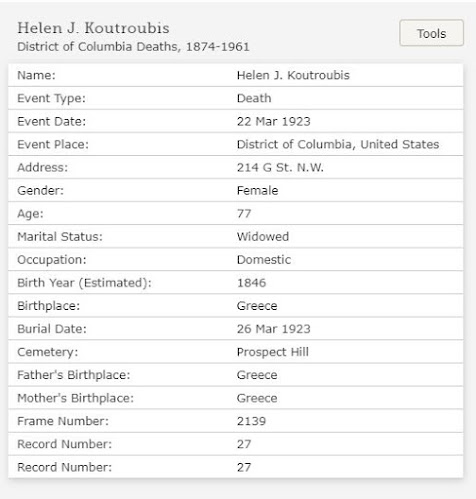 FamilySearch.org has a new FREE database titled "District of Columbia Deaths, 1874-1961" which includes 725 people born in Greece . What is in This Collection? The collection consists of an index and images to death records from the District of Columbia. The records cover the years 1874 to 1961. The records were recorded by hand on pre-printed forms. What Can These Records Tell Me? The following information may be found in these records: Name of deceased Date and place of death Age and gender of deceased Race Marital status Occupation Birthplace of deceased and parents Duration of residence Cause of death Name of person(s) who removed the body Name of undertaker Place and date of burial Deaths were recorded to better serve public health needs. Death certificates were also used in connection with the probate of wills and the administration of estates. Registration of vital statistics began in 1874 for the District of Columbia and was generally complied with by 1880 for death
Post a Comment
Read more

The Trials and Tribulations of Panayiotis and Giannis Seitanidis 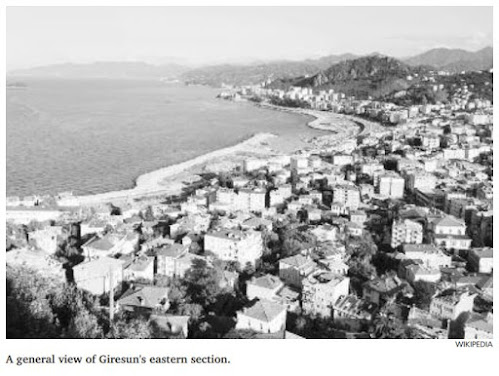 THE TRIALS AND TRIBULATIONS OF PANAYIOTIS AND GIANNIS SEITANIDIS by Stavros Stavridis published in The National Herald May 16, 2020 The National Herald has given HellenicGenealogyGeek.com permission to post articles that are of interest to our group. -------------------------------------------- An Australian Pontian friend of mine, Peter Seitanidis heard that I am a historian specializing in the history of Asia Minor covering the years 1919-23. He contacted me wanting to tell me the stories of his grandfather and great uncle. Peter stated that his elderly father recounted the family story of escape, survival, and deportation from Pontos. His ancestors were originally from the city of Kerasounta (Giresun) on the Black Sea coast. The family story passed down to Peter has gaps that can be filled from other sources. Finding specific information about Kerasounta hasn't been easy but I pieced it together from scattered information.  Before delving into Peter's account, I will provide
Post a Comment
Read more
More posts