Work with the Asia Minor Refugees at Athens - 1922 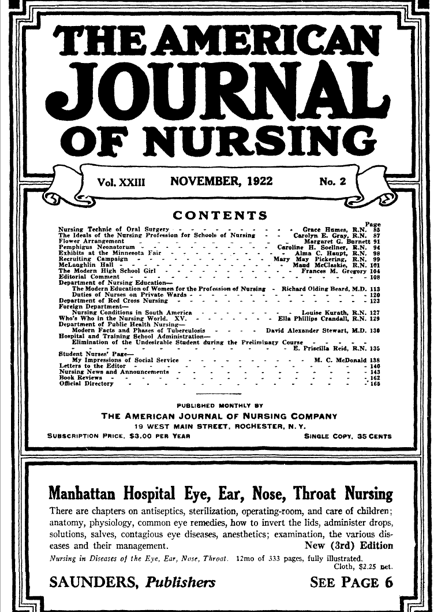 Hundreds of letters from Red Cross nurses are being received at National Headquarters, offering their services for work with the refugees from Asia Minor.  The work of the Red Cross will be centralized at Athens, Greece, where the majority of the refugees are being sent.  Fortunately, the Red Cross had stationed at that point Mrs. Charlotte M. Heilman, who has been in charge of the Infant Welfare work for several years, and two Greek, American-trained, nurses, as well as a large group of Home Visitors.  Mrs. Heilman immediately took charge of the nursing situation, and has utilized her personnel as far as possible for their care.  In a recent letter, she states:

The refugees are arriving by the thousands.  They are huddled together at the Port of Piraeus like sheep. * * *  I have been over the camps at the Port, and two of the smaller ones, and the people are all in bad condition.  Refugees of the better class have been taken into homes at Piraeus and Athens.  I have one young woman from the Y.W.C.A. in Smyrna, at my house.  The ladies of Piraeus take the girls who are at the American School at Smyrna to their homes to bathe, and to give them a good meal, and let them go to a Protestant church where they are camping.  We all have to divide our clothes with the refugees because most of them have only what they are wearing.  There are masses of children and small babies who need care.  Miss Zacca, an American Red Cross nurse, and I made a plan, and gave it to the Director of the Ministry of Public Assistance, for the feeding and caring of these babies.  There are no buildings.  We are trying to persuade them (Greek authorities) to erect some wooden barracks for the children, so that we can separate them from the adults.  There is so little work to be had in Greece, I am afraid there will be tremendous suffering, as it gets colder.  Already the children are crying with the cold at night, and there are no blankets to give. * * *   The Americans in Athens have organized a Relief Committee and will help in every way possible to assist the A.R.C.  Upon this Committee - the Legation, the Consulate, the American School, Standard Oil Company, American Express Company are represented, with the Director of the Y.W.C.A. as Executive Secretary.

The American Red Cross immediately cabled $25,000 to Rear-Admiral Mark Bristol, Chairman of the Constantinople Chapter, for temporary relief.  Later this was augmented by a lump sum of $50,000 to supply clothing and blankets,  and another $25,000 for the purchase of medical supplies.  This will probably be used in and around Constantinople.  In order that supplies may be provided for the refugees in Athens, $50,000 has been cabled to the Red Cross representative in Paris to be devoted to the purchase of blankets and clothing, and $25,000 for the purchase of medical supplies.  The last record shows about one hundred thousand refugees in Athens, forty thousand in Salonika, with thousands pouring into these two cities from the territory in Greece overrun by the Turks.

In order to augment Mrs. Heilman's nursing staff, Sophie C. Nelson and Rose Schaub have been ordered to proceed from Vienna, Agnes Evon from Constantinople, and Theodora Legros from Paris.  Dr. A. Ross Hill, Director of Foreign Operations, sailed for Europe on Friday.  No nurses will be sent from American until Dr. Hill has an opportunity to investigate the need.  A small unit of qualified nurses is being held in readiness, however, to proceed upon the receipt of cable communication.