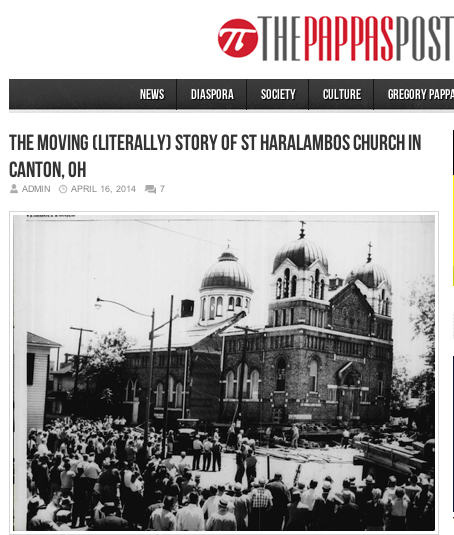 April 16, 1958 - The story behind St Haralambos Greek Orthodox Church in Canton, Ohio, is a powerful and moving (literally) example of the unity and commitment that binds the Greek American community.

Short listed as one of the 10 treasures in Stark County, the church was moved four miles through the center of Canton all the way to Harvard NW in 1958.  It took several trucks and 60 wheels of steel beams to pull the church to its new home.

. . . .  Their story starts in the early 1900s.  The very first Greek immigrant to settle in Canton was a tailor named George Loukas.  He arrived in 1898.  Two years later, there were 50 Greeks.  It wasn't long before the fast-growing Greek immigrant community of Canton started thinking about building their own church.