On the Trail of a Greek Bourgeoisie Clad in Traditional Garb

The article "On the Trail of a Greek Bourgeoise Clad in Traditional Garb" was posted in the Archivist's Notebook by Vivian Florou on July 1, 2014

Vivian Florou here contributes to the Archivist’s Notebook an essay about  high-society Greek women in the decades between the two world wars. The traditional festive costumes that they wore on their social outings defined the aspirations of their class. Florou explores this fashion trend within the intellectual context of the period and the so-called “Generation of the Thirties.” 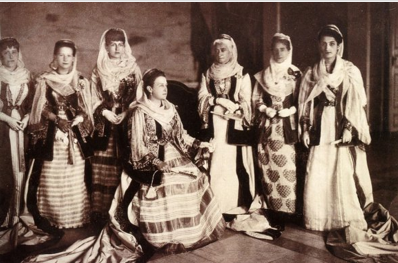 On Sunday evening, the 25th of October 1931, Antonis Benakis and his wife received representatives of the International Council of Museums in the grand ballrooms of the newly established Benaki Museum, his former residence. A page of the daily newspaper Πρωΐα (Proia) the next morning preserves forever in a caption to a sketch the particular event that distinguished that reception: “Κυρίαι και δεσποινίδες της κοινωνίας φέρουσαι διαφόρους ελληνικάς ενδυμασίας επέδειξαν εις τους ξένους την χάριν και την αρμονίαν των ελληνικών αμφιέσεων.” (Madames and mademoiselles of society in Greek costumes of various kinds demonstrated to foreigners the joy and harmony contained in Greek apparel.)
From their names on the sketch we learn that these were women of the Greek elite of that period. What were they doing dressed in clothes so foreign to the experiences of their daily lives? Why were they swirling the heavy fabrics of their garments amidst the foreign representatives? Did their behavior simply reflect a folkloric movement or was it an expression of “committed art” set against an historical backdrop? This clipping from Πρωΐα of 1931 inspired me to look for photographs that shed light on the appropriation of folk art by the Greek bourgeoisie in the interwar period (1919-1938), but also earlier, in the 19th century.  . . .

READ THE ENTIRE ARTICLE ALONG WITH PHOTOGRAPHS