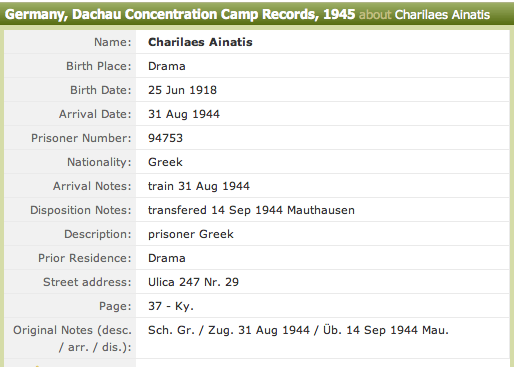 Ancestry.com has a database online that is titled - GERMANY, DACHA CONCENTRATION CAMP RECORDS, 1945 which has 832 people listed as having Greek Nationality.

Ancestry.com description
Historical Background:
Established in 1933, Dachau was one of the first Nazi concentration camps. Until it was liberated on April 29, 1945, over 206,000 prisoners from all over Europe, Jews and non-Jews, were held there. Some, particularly in the early years, were released, and transfers to and from Dachau were common. There are over 31,000 registered deaths in Dachau, but many deaths were not registered, so the total is not known.
From 1933 to 1945 over 206,000 registered prisoners were held at some time in Dachau. Many had been transferred from other camps. Virtually every European nationality was represented, with the largest numbers from Poland, the former Soviet Union, Hungary, Germany and France, but there were also substantial numbers of Italians, Lithuanians, Czechs, Slovenes and Belgians. Dachau was not a death camp per se, but the harsh conditions there led to over 31,000 registered deaths, though the real number was undoubtedly higher. Many Soviet prisoners of war were never registered and large numbers of them were simply executed. Medical experiments were performed on inmates, and many perished. Dachau was also used in Germany’s euthanasia program and thousands of “invalids” were systematically murdered.
Shortly before liberation, in late April 1945, there were over 67,000 registered prisoners in Dachau, including over 22,000 Jews. Many perished in forced marches during the last days before liberation of the camp a few days later.
About the Database:
This database contains information on Dachau prisoners who were included on a survivors list prepared after the end of the war. Generally the following information was recorded about individuals: