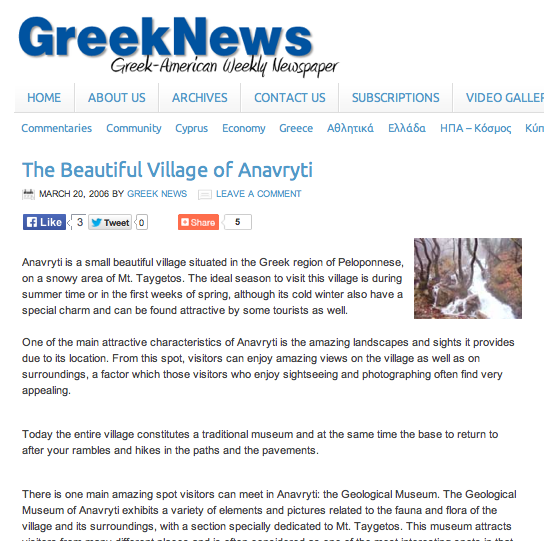 Thanks to John Vasilakos for posting this on Facebook.

The article titled THE BEAUTIFUL VILLAGE OF ANAVRYTI was published by the GreekNewsOnline.com on March 20, 2006.

Anavryti is a small beautiful village situated in the Greek region of Peloponnese, on a snowy area of Mt. Taygetos. . . . The article promotes tourism to the village.

There is a section of the piece that is titled FOUNDED BY JEWS?

In an article published in the Oxford Journals, John Launer writes the following about Anavryti:
“I found out that the legend of the Greek mountain Jews was not nearly as improbable as it seemed. Indeed, the Apocrypha records contacts between the Maccabeans and the Spartans that go back to the third century BC. Over a millennium later, there were Jews living in Sparta—although a monk named Nikon tried to have them expelled, in exchange for helping the inhabitants to overcome the plague. A Jewish quarter survived in Mystra itself after the Turkish conquest, only to be burned down later by the more brutal Venetians. Maybe the village of Anavriti had been founded by the survivors of one of these upheavals.
A few years passed before I found myself back in Mystra, this time accompanied by my wife. It was, of course, unthinkable to miss the chance of finally visiting Anavriti. Following local advice, we took a taxi from Mystra to a gravel mill in the countryside a few miles up the road, and asked someone there to show us the trail head. Rather untypically for Greece, the advice turned out to be entirely accurate and useful. Soon, we found ourselves climbing in glorious weather along a spectacular kalderini—an ancient cobbled donkey track that had borne Mycenaean traders across the mountains to the coast, hundreds of years even before Sparta was dreamed of, let alone Mystra. Two hours later, we reached Anavriti with a sense of triumph. We collapsed into a bar in the main street, and ordered some drinks in our minimal Greek. Having finally arrived here, how would we find out anything about the place or its history?
‘How ya doing?’ were the first words we heard. Evidently, we had no need to worry. An elderly man had sauntered over to our table, sat down, and begun to speak in perfect Brooklyn. Introducing himself as Louis (we never learned his Greek name) he explained that he was Anavritan, born and bred. Originally destined for a monastery, he had not found the idea much to his taste. Instead, he joined the Greek navy and ended up living in the USA for 45 years until he came back here to retire. When he was a child, he explained, there were 4200 inhabitants in Anavriti, including 400 schoolchildren. Nowadays, the population was made up largely of retired Greek Americans like himself—hence the wealthy-looking houses and renovated roofs we could see all around us. There were now only six children in the whole village, although they still employed a teacher to keep the school going.
Louis told us about his own family. We learned about his son, his Cuban daughter-in-law and his Spanish-speaking grandchildren. He described some of his chequered career in New York and Florida, which included an episode of smuggling diamonds from Ghana. Most people, on learning that my wife is a rabbi, are somewhat fazed at first. Not so Louis, who at one time had been in the catering business in New York. There, he had a male rabbi as a business partner, and had known many female rabbis as acquaintances. His company had catered for literally hundreds of large-scale bar mitzvahs. (‘They don’t do them now like the old days!’ he lamented.) He addressed my wife as ‘Rabbi’ at every turn. And then, suddenly, he cracked a Jewish joke and broke into Yiddish—the language of mediaeval Germany, carried into Poland and Russia by Jewish exiles, and then, half a millennium later, into America, to be picked up by every New Yorker of whatever origin.
Was Anavriti itself really Jewish, we asked him. Yes, he replied, that’s what the old people say. According to popular tradition, the village was founded by Jews around 500 AD. Later on everyone converted to orthodox Christianity, he said, but they were proud of their origins, and disappointed that the young people took no interest in the tradition. And yet, to tell the truth, I think we hardly cared very much ourselves by that moment who had founded Anavriti, or why. Sitting here, with the ironies and interconnections of a dozen civilizations echoing in our conversation and reverberating through the surrounding landscape, all that seemed to matter was the miracle of chance meetings and inexplicable coincidences, and the enduring beauty of Greece itself”.
READ THE ENTIRE ARTICLE