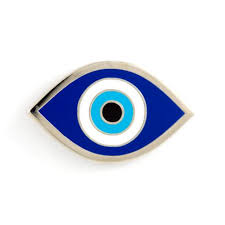 You do not expect to see a display of metaphysics in your local milk bar, but I think that's what I witnessed when I watched a man curse a woman who carelessly leaned across him while pointing to an item in the dairy counter. The woman looked sad and preoccupied, and when she bumped against the man, she apologized. He responded with a deliberate, softly spoken curse.

The woman drew herself up and looked down at the man. He was a small man. "What did you say?" she asked, not raising her voice.

"You heard," he replied.

What happened next is hard to describe. She continued to look at the man, but he couldn't hold her gaze. After a long moment he turned his head and left the shop.

Later I asked her what had taken place. She said she didn't know exactly, but thought she might have given the man the evil eye.

The woman was Greek. Her grandmother believed in the evil eye, and it surprised her that this old knowledge, which she did not know she shared, should have risen in her.

One does not hear about the evil eye much in Australia, but years ago in Greece, I made a game of asking people whether or not they believed in it.

At the time, I was living in a mountain village in the Peloponnese, a remote, wild and beautiful place. Most of the villagers were old people who believed in magic and spirits. Living with them, one could sense how such a landscape, with its deep valleys, its hidden gullies, its majesty and isolation could influence a person's sense of what was real and what was not.

My neighbor, Antioni, for instance, liked to tell the story of her childhood encounter with a water nymph. She was a schoolgirl walking through the fields with my Uncle Nick when they saw the nymph - or Nereid - combing her hair by a stream. Nick, who was a big strong boy, ran away in fright because everybody knew nereids bring bad luck with them. But Antioni said she had not been frightened; she thought the water nymph was beautiful.

Then again, it may have been that she was not frightened because the nymph had not been there for her. Soon afterwards, Nick was thrown from his horse as he rode past the stream where he had seen the nereid and died. And from that day, his mother - my grandmother Katerina - believed she had been cursed by the evil eye.

There is a strange logic at work here. According to traditional belief, the evil eye is most likely to afflict the handsome, the strong and the fortunate - those who are blessed attract a curse. To believe in the evil eye is to recognize that flattering praise may conceal a dark wish to inflict harm.

That is why a Greek person might spit upon a healthy, bonny baby or a lovely young bride. The purpose of these polite, false little spits - they sound more like tootoos (“ptou-ptou, mi to matiaso,” i.e., let me not give it the evil eye) - is to avert the possibility of an envious curse and the harm it might do.

People who have been so cursed (or who believe they have) will complain of the sudden onset of nausea, dizziness, headache and cold sweats. To discover if the evil eye is the cause, it is necessary to place some drops of olive oil in a glass of water. If the oil dissolves in the water, then the evil eye is at work (or so it is said).

When I lived in Greece, my cousin Dina would often complain of being afflicted with the evil eye. Out came the water and the olive oil; sighs and tears would follow if the oil dissolved. The remedy was to find a woman, usually an old woman, who had the power to say a counter-curse and nullify the effect of the evil eye. This could be done over the phone if necessary.

One afternoon, as Dina was performing this routine, I asked her to check if I was also under the influence of the evil eye.

We watched together as the olive oil dissolved in the water.

"You see? It's rubbish. I should be suffering but I'm perfectly okay," I said. "All this proves is that it doesn't affect you if you don't believe in it."

The counter-curse, more accurately, is a prayer of protection. In Greece, I was taught some versions by my neighbors, who believed that mothers ought to share this knowledge. Each woman taught a different prayer. My favorite called upon the spirits of the mountains and the forests, as though all of nature could be called upon in this battle with evil.

In my private survey, I asked an uncle who ran a nightclub about the evil eye because he appeared to be more cynical and detached than most people.

"Everyone believes in the evil eye," he told me. "Even the people who say they don't believe in it, believe in it." He described how, at his club, young blades would come in clutching their stomachs or their heads in pain, searching for the woman who worked at the bar because she was said to be handy with the counter-curse. My uncle rolled his eyes and dragged on his cigarette.

"And what about you? Do you believe in it," I asked?

Materialism is uncompromising: The ineffable is either everywhere or nowhere. Looked at another way, a belief in spirits, good and bad, could also be a source of meaning and hope.

Back in Melbourne, my neighbor wondered if the man she had cursed would come to harm. "Maybe you didn't curse him, at all," I suggested. "Maybe you just turned his curse away."

She smiled, relieved and satisfied. "That's what my grandmother used to do," she said.

The Age published the above on May 27. The original headline is, “Evil in the eye of the Culture in Greece: To believe in the evil eye is to recognize that flattering praise may conceal a dark wish to inflict harm.”