American Reactions to the Asia Minor Deportations in 1922 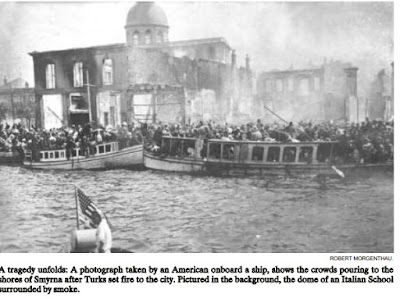 AMERICAN REACTIONS TO THE
ASIA MINOR DEPORTATIONS IN 1922

This article will outline how the eyewitness accounts of two American Near East Relief workers, Dr. Mark Ward and F. Yowell, concerning the deportations and massacres of Christians in Asia Minor had mobilized organizations and individuals in the United States into action. These eyewitness testimonies were published in the major U.S. newspapers. It should be noted that American organizations and individuals supported the British Government's initiative to establish an inter-Allied commission of inquiry into the atrocities committed in Asia Minor.

Lobby groups, Churches, missionary organizations and private citizens organized meetings, sent letters and telegrams to the State Department regarding the importance of an Allied investigation into the Turkish atrocities.

George R. Montgomery, Director of the Armenian American Society, wrote to Undersecretary of State William Phillips on May 22, 1922 outlining his reasons as to why the U.S. Government should accept the British invitation to investigate the Asia Minor atrocities. Some of his suggestions were that the Harding Administration had shown very little interest in Near Eastern affairs, and thus had abandoned some of the expected assistance which had been promised under Woodrow Wilson's presidency.

The United States could participate in an international inquiry without getting entangled in the affairs of the European powers. Mr. Montgomery was concerned by a news report in the Chicago Tribune, emanating from Larry Rue in Constantinople, ridiculing Mr. Yowell's report. He told Mr. Phillips that Near East Relief in New York considered Rue's report incorrect, and that Rue was known for his longtime bitter resentment “to the Near East Relief activities.”

Furthermore, an American refusal “would be interpreted in Turkey as an act of friendliness towards the Turks, and as indicating a lack of interest in the fate of the Christians in Asia Minor.” He further stressed that the American public would be “disappointed” if the U.S. did not participate along with Great Britain, France and Italy to check the veracity of American eyewitness accounts in Asia Minor.

At a large meeting held at Carnegie Hall in New York, presided over by Rev. William T. Manning, Episcopalian Bishop of New York, along with other religious and community leaders (e.g., Greek and Russian Orthodox Archbishops, Dr. Lacy of Brooklyn, Barton Malcolm, an Armenian lawyer, Mr. Montgomery, National Herald Publisher Thomas Tatanis and Nicholas Panagopoulos) passed a resolution expressing their concern regarding the fate of the Christians of the Near East. This declaration was forwarded to the Secretary of State Charles E. Hughes on June 2. They believed that the presence of the Greek Army in Asia Minor was the effective guarantee “for the safety of the Christians and other non-Turkish minorities.” They appreciated Great Britain telling the world of these outrages, and urged the U.S. to participate in the investigation.

The Greek Orthodox Church in America was pleased with the U.S. Government's intention to participate in the atrocity inquiry. Archbishop Alexander telegraphed Hughes expressing his “eternal gratitude for the Christian humane move of the Government.”

This could be further seen when a meeting of over 500 Greek Americans attended a mass meeting at a Greek Orthodox Church in San Francisco urged both Harding and Hughes “to use their great influence toward stopping the terrible sufferings of many thousands of Greeks at the hands of the Turks.” Congressman John J. Nolan of California passed this onto the State Department, requesting that “a statement as to the general attitude of the Department in matters of this kind.”

Fred B. Smith, president of the Federal Council of Churches of Christ in America, wrote two letters to Mr. Hughes and Allen W. Dulles in Washington on June 12 and July 21, 1922. In the first letter, he was pleased that the U.S. would probably cooperate with Britain “in making an investigation of the honest truth concerning the situation.” Mr. Smith believed that Admiral Bristol was using his position as U.S. High Commissioner in Constantinople to “whitewash the whole situation and evade the actual facts.”

In his second letter, Mr. Smith made known his opposition to an appointment of an individual from the U.S. Army to the proposed international commission of enquiry: Such a person would come under Adm. Bristol's influence, and under such circumstances, the investigation would be a complete waste of time.

Mr. Smith proposed that American appointments to this commission of inquiry should come from commerce and have an education which would observe impartiality and fairness in collecting the evidence from such an investigation. Some of the proposed names included President William H.P. Faunce of Brown University, Bishop MacConnell of Pittsburgh, University of Michigan President Marion LeRoy Burton (Ann Arbor), Georgia Tech President Kenneth G. Matheson, Kansas Governor Henry J. Allen, and Bishop Brent of the Episcopalian Church.

Even the main U.S. missionary organization, the American Board of Commissioners for Foreign Missions, was pleased with the decision of the U.S. Government to join with the Europeans in sending a commission of inquiry to Turkey. On June 26, James L. Barton told Mr. Hughes that there were press reports suggesting Mustapha Kemal (Ataturk) would not welcome an investigation team into Anatolia, and that the commission should reject this kind of action on Kemal's part. Constantinople, Smyrna and Syria, and possibly Trebizond and Samsoun, were entry points where the commission could proceed into the Anatolian interior, according to Mr. Barton, who hoped that “Admiral Bristol and mission interests in Turkey will be requested by the Department of State to put at the disposal of the commission any and all information in their possession.”

The most important part of Mr. Barton's letter was that “all Americans who may be approached by the commission will be requested to give the commission all of the information they possess touching the condition of affairs in the interior of Turkey and the relation of the Kemalist Government to American interests.” There is no doubt that Mr. Barton was concerned about the future economic value of American missionary property and long-term viability of American institutions in Asia Minor.

Private American citizens sent letters to Mr. Hughes expressing their concerns over the fate of the Christians in Asia Minor. Edgar J. Fisher, a Professor of History at Robert College in Constantinople, offered two suggestions in solving the problems of the Near East.

First, he said, “Ours is a definite American control of the administration of Constantinople and Asia Minor, until such time as the hatreds, now greatly increasing, have subsided, and the people can be trained to govern themselves.” The second plan involved submitting the whole Near East issue to an international body like the League of Nations for resolution. Once the League made its decision, then the European powers and the U.S. would promise to respect and guarantee its decision.

While these two propositions had merit, they would ultimately have no chance of success. For starters, the United States was not even a member of the League, and had decided to remove itself from the entanglements of the Old World. The League of Nations was predominately an Anglo-French club.

A Greek woman and an Armenian resident in the United States expressed their concerns, too. Vasilike Haralambou of New York wrote to President Harding's wife on May 31, stating that the Turks had killed her brother “without any reason,” and had deported her younger brother into the Anatolian interior. She also mentioned that her 70-year-old mother had to take care of four starving orphans in Samsoun. She appealed to President Harding on behalf “of all Greeks and Christian sufferers of Asia Minor.”

M.N. Azgapetian's letter to Mr. Hughes on June 8 outlined the former's concerns that the international commission should not have individuals like Admiral Bristol or members of the American Board of Foreign Missions collecting information from eyewitnesses. He believed that an Armenian and Greek would be ideal candidates to assist an American Commissioner. These individuals would be well-educated; be of superior character; and knowledgeable of French and native languages, he said. They should be familiar “with the tricks and deceptions of the Turks.” Moreover, these individuals could “reach witnesses, in spite of Turkish obstacles, and should know how to discern Christian testimony under threats and duress.”

All these organizations and private citizens were pro-active in their endeavors to assist the Christians of Asia Minor. Their heroic efforts were undermined by the lack of unity and resolve on the part of the United States and European Powers to use military force against the Kemalists.

Mr. Stavridis is Historical Researcher at the National Center for Hellenic Studies and Research, Latrobe University at Bundoora, Victoria in Australia.