National Geographic "Under the Heel of the Turk" 1918 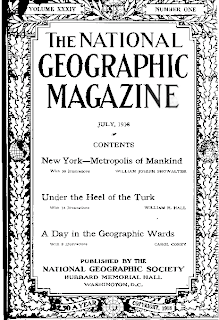 In July 1918 the National Geographic Magazine published an article "Under the Heel of the Turk: A Land with a Glorious Past, a Present of Abused Opportunities and a Future of Golden Possibilities" by William H. Hall. The above link will take you to the Free online copy offered through Google - (Reference pages 51 - 69 on the actual printed pages)
This article has some great photographs of people of all nationalities living in Turkey. I just love looking at the details of old pictures and trying to imagine what it was like living in those times. I don't think I would have liked it - it was a hard, hard life for women.
Just as the title suggests this article focuses on Things From the Past, The Influence of Constantinople on World Events, The Price of Neglect and Injustice, The Land and Its People, All Government in the Hands of 300 Men, The Land of Saladin the Kurd, Once the Richest Land in the World, Natural Features, Population of the Ottoman Empire, The Varied Resources, Splendid Possibilities - Neglected Resources, Primitive Methods of Agriculture, The Mountains Still Full of Valuable Ore, Petroleum Deposits, Water Power, Commercial Advantages, Splendid Natural Harbors, The Parable of the Unprofitable Servant.
I have included a few excerpts from the article:
"The population of the Ottoman Empire, not including Arabia, is about 18,000,000, or was before the war. In giving statistics on any subject regarding Turkey one speaks in approximate terms, for only estimates can be given, as no thorough census is taken or other statistics systematically gathered. Among the various races this total was distributed as follows: Turks, 7,000,000; Syrians and Arabs, 4,500,000; Kurds, 2,000,000; Armenians, 2,000,000; Greeks, 1,500,000; Jews, 500,000; other races, 500,000.
All of these peoples can trace their history back to the period when fable and legend blend with the beginnings of historic facts. And all, except the Turks, have inhabited, from time immemorial, the districts in which they are now found.......
The Christian races are the most progressive part of the population; they have been most responsive to education and have made some progress in establishing schools of their own. The Turks are the most backward of all; yet under proper encouragement and facilities they are capable of good progress. In competition with Greeks, Armenians, and Syrians, however, they invariably fall behind."
"With the exception of Damascus, Smyrna is the largest city in Turkish Asia. This, the chief seaport of Anatolia, has a population of more than 200,000, of which fully one-half are Greeks, 60,000 are Turks, 20,000 Jews, 12,000 Armenians, and 15,000 Europeans and Levantines."
".... The Greeks, putting out from their islands near by Asia Minor shore and from Ephesus and other cities of the mainland, were the great carriers and traders of ancient times. We read that King Solomon, taking advantage of his location between Egypt and Assyria, carried on a great business of mercantile exchange between these empires and became a merchant prince, whose renown spread to the corners of the earth. Following in the footsteps of their ancestors, the people of those lands, they Syrians and Greeks and Armenians, have established a reputation as traders the world over."
Hope you find this National Geographic article interesting.
Georgia Keilman nee Stryker (Stratigakos)
http://HellenicGenealogyGeek.com
Asia Minor Books Jewish Photographs Turkey