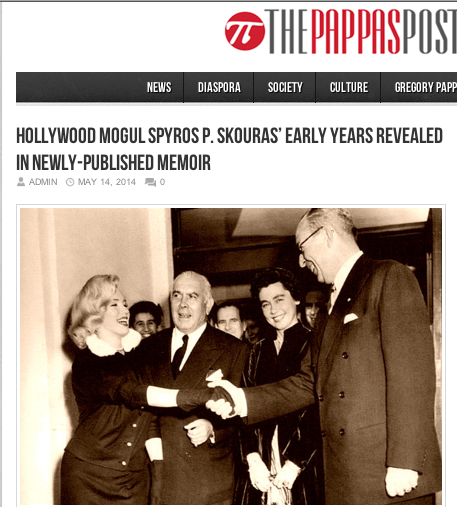 Ilias Chrissochoidis, a Greek composer and research associate at Stanford University, recently discovered a treasure trove of material – original documents, rare photographs and never before seen biographical notes dictated by Spyros P. Skouras, one of America’s most influential Greek immigrants
Originally from Thessaloniki, a curious Chrissochoidis spent all of last year digging through 86 boxes of papers that had been donated to the university by the Skouras family back in 1988.
Skouras was best known as the 20th century motion picture mogul who gave Marilyn Monroe her big break.
“It was out of curiosity that I went through all the boxes and discovered Skouras’ autobiographical notes,” says Chrissochoidis. “I looked through all 86 boxes. I went through several thousand pages. This is what I did for the past year.”
Now, all this information is available in a new book titled Spyros P. Skouras Memoirs (1893-1953) published by Chrissochoidis.
Impressed by the archive, the Greek America Foundation sponsored and funded Chrissochoidis’ research and is now hoping to use the book as the basis for the first-ever documentary project on Skouras’ life and achievements.
The making of the archive
The significance of the Skouras archive, a collection that is being preserved at the Stanford University’s library, is difficult to overestimate.
“Skouras was trying to write a biography,” says Chrissochoidis. “This was in the 1950s – around the time he introduced the cinemascope. There was a lot of interest in his life and career.”
The cinemascope was a special type of lens used for shooting wide-screen movies between 1953 and 1967.
Skouras, a motion picture pioneer and movie executive who was the president of Twentieth Century Fox between 1942 and 1962, began dictating his autobiography back in 1953 and again in 1965 at which time he had become passionate about the idea of writing his autobiography.
READ THE ENTIRE ARTICLE