Book - Our Own Foreigners - re: Greek and Turkish Population Exchanges 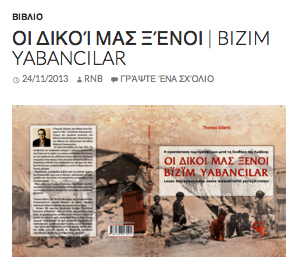 I take this opportunity to mention here what might be the first book with Greek-and-Turkish face-to-face text:  Thomas Sideris' ΟΙ ΔΙΚΟΙ ΜΑΣ ΞΕΝΟΙ - BIZIM YABANCILAR  ("Our Own Foreigners"), published last year in Athens, deals with the Lausanne Treaty and the resulting stories of Greek and Turkish exchanges:  it is a small but honest and informative book.

Follow this link to READ MORE about this book.

[A story that stands out concerns an old Turkish lady's tearful recollection of the execution of a Greek butcher by French soldiers (in WWI Greece) ... just because he did not deliver his gun. Elsewhere in the book ... Ataturk is directly accused by a Greek refugee for atrocities in Pontus, while a Turkish refugee states that life for them in Ioannina became difficult only after the start of the Asia Minor Campaign. And there is much more about life in the new lands, of course.]