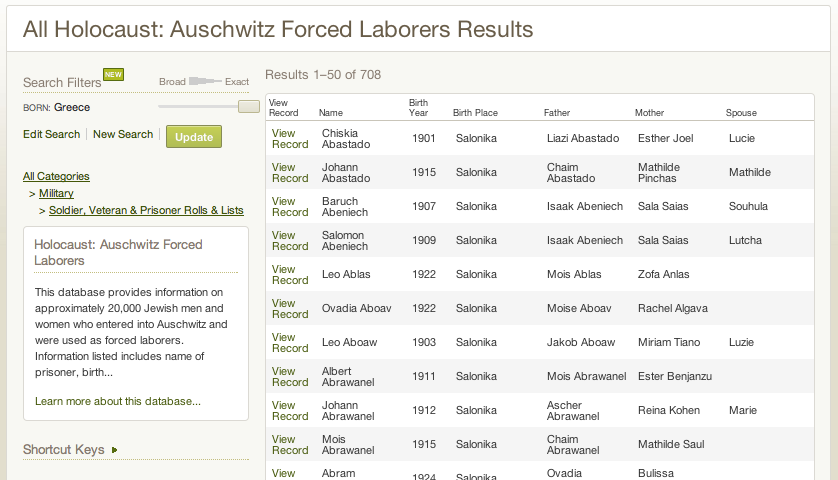 Ancestry.com has a database online that is titled - HOLOCAUST:  AUSCHWITZ FORCED LABORERS which includes 708 people who listed Greece as their place of birth.

Historical Background:
Auschwitz is undoubtedly the best known of all Nazi concentration camps, and it was the biggest. While exact figures are not known, about 1.2 million persons were sent there and about 1.1 million of these persons perished in Auschwitz. About one third of the persons who arrived there were not murdered immediately, but rather were "entered" into the camp and used as forced laborers. Records were kept with respect to such persons, including Personalbogen -- personnel files -- usually consisting of a one-page form giving information on the prisoner and his/her relatives. Unfortunately, most of these forms were destroyed by the Germans as the Russians approached, but a few forms survived.
About this Database:
Volunteers at the U.S. Holocaust Memorial Museum computerized 5,310 of these forms, and they provide information on about 20,000 Jewish men and women. The forms themselves are available in the Museum's archives, and copies will be sent to interested persons on request. It should be noted that, unlike ghetto records in some Polish cities, these forms do not include photos. The forms also do not disclose the fate of prisoners. From other material it was determined that a few survived, but most perished in the months after their arrival in Auschwitz. In some cases the death dates can be determined by checking the Auschwitz Death Books, published by the Auschwitz Museum.
The fields included in this list are as follows: