Documents: The Jews in Greece, 1941-1944 - Eyewitness Accounts by Alexandros Kitroeff 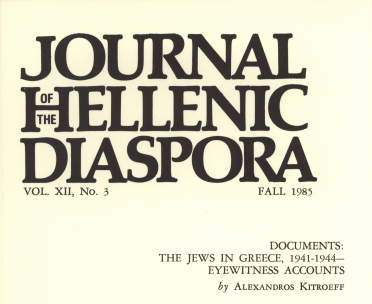 DOCUMENTS:
THE JEWS IN GREECE, 1941-1944
EYEWITNESS ACCOUNTS
by Alexandros Kitroeff

Published in the Journal of the Hellenic Diaspora, Vol, XII. No.3 ; Fall 1985

From the article:
Introduction The nearly total extermination of Greece's 80,000-strong Jewish community during the Second World War is broadly known.  Specialists of this period are familiar with the more detailed aspects of the Nazi measures designed to apply the "final solution" in Greece, as well as the assistance Greek Jews received from resistance organizations and individuals. A number of monographs addressing specific issues related to the fate of Greek Jewry are beginning to appear.' In fact, the quantity of information on Greek Jews during the war, both in terms of empirical data as well as of working hypotheses, is already demanding a more synthetic approach.  . . .  These documents consist of accounts of the conditions faced by Jews in wartime Greece related by Jews who managed to leave occupied Greece. These descriptions appear in the documents of four separate sources of information. The first is the U.S. Office of Censorship, which monitored information in the Allied and Axis press; the second is the Military Attaché's office in Istanbul, Turkey; the third is the U.S. Consulate in Istanbul and the fourth is the Office of Strategic Services. It must be stressed that what follows is neither a full set of documents on the Jews in wartime Greece, nor a complete series of documents on this subject by each of the four separate services. It is, rather, a selection of these which reflects the overall picture of the circumstances under which the fate of the Jews tied in with the general situation in wartime Greece. These descriptions are among the very few contemporary records of how ordinary people experienced the Nazi extermination of Greek Jews. . . .