BOOK - History of the Island of Kos: Ancient - Medieval - Modern; by Vasilis Hatzivasileiou; Translated into English by Dr. Nicholas Itsines 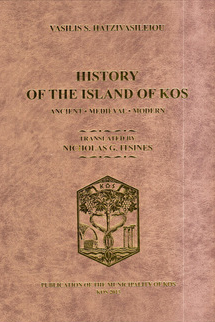 HISTORY OF THE ISLAND OF KOS

I initially learned about this book through an article in THE NATIONAL HERALD - "Translation of Book about History of Kos Island is Presented in Astoria" by Constantine S. Sirigos, published in the January 17-23, 2015 issue.

The following information is from the website of  S. Claus. Hatzivassiliou

It is described as being 802 pages - "An elegant, gold-bound edition, which includes Geography, Topography and the whole History of the Political, Social, Economic and Cultural life of the Koans from the pre-Historical period until the Union of the Dodecanese with Greece.  The work is accompanied with 500 rare photographs, of which 220 are in color, and a colored foldable archaeological map of Kos.  At the end of the book there is a general bibliography, chronological table, and an index.  - - A publication that should be in the house of every Koan abroad and a foreigner who loves History.  Because History unites today with yesterday and tomorrow.

From The National Herald article:

NEW YORK - The men and women who make contributions and sacrifices for the well-being of a community and the preservation of its heritage are called heroes.  Among them are the authors who convey its history to future generations - and the translators who make the story of the homeland accessible to its diaspora.

Nicholas G. Itsines was the featured speaker at the Hellenic Cultural Center of the Archdiocese on January 11.  He is not only the translator of History of the Island of Kos:  Ancient - Medieval - Modern, the magisterial tome written by the distinguished scholar Vasilis S. Hatzivasiliou, but its benefactor as well.