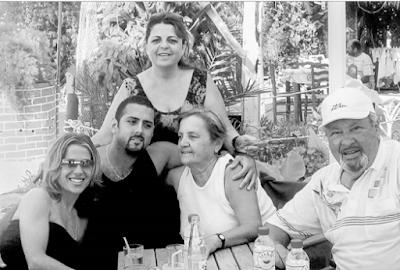 WASHINGTON, D.C. - A baby boy is born at a local hospital in Patras, Greece on April 7, 1950.  A few months later, the infant boy is baptized at Saint Nicholas Church in Patras at two months and 26 days of age, and is given the name Charalambos.  His 18-year-old mother, Maria Valassopoulos, due to youth and financial limitations, is forced to make an immensely difficult decision:  She decides to give her only child away to the local orphanage.

Charalambos stays with the Eberts for no more than ten years since, for unknown reasons, the family could no longer keep him.  As a result, 10-year-old Charalambos then went to a New Jersey orphanage, where he stayed until he becomes a legal adult.  At 18 years of age, Charalambos Ebert met Linda Ritzo, and they eventually got married.  A few years later, the couple has two boys, Richard and Michael Ebert.

For more than 20 years, Charalambos Ebert tried to get in touch with his biological mother in Greece, who is now called Maria Boukouvalas (after her second marriage).  With absolutely no Greek, and with hope as his only ally.  Mr. Ebert tried to collect any information possible which could lead him back to his natural mother, from whom he was unwillingly separated almost 40 years earlier.

In 1999, Mr. Ebert's dream almost came true.  According to a friend of his from New Jersey, who asked to remain anonymous, Mr. Ebert finally gets a hold of his mother through the orphanage in Patras.  The following summer, he planned his trip to Greece so he could meet his mother and spend a few weeks with her.  A tragic accident stopped Mr. Ebert from visiting Greece, however,   A few weeks prior to his departure, Charalambos Ebert died during an automobile accident in Southampton, New Jersey.

But his desire to meet his mother was fulfilled.  Last summer, Charalambos' youngest son, Michael, went to Greece and finally met his grandmother.  Michael's good friend and co-worker, at the restaurant where he works as a waiter, helped him call his grandmother and arrange a meeting with her in Greece.

"My friend Lefkothea Malapetsas is fluent in Greek, so she helped me communicate with my grandmother,"  Michael said.  In August 2005, Michael travels to Greece with his girlfriend Kim to meet his 75-year-old grandmother and the rest of the family:  his aunt, uncle and cousins.

Michael described his adventure for The National Herald, as well the defining moment when he met his father's mother.

"We arrived in Athens.  Lefkotheas' husband picked us up from the airport.  He gave us a tour of the Greek capital, and two days later, we rented a car and drove a few kilometers outside Pyrgos, where my grandmother's town is located.  That wasn't so easy, since the map they gave us at the airport was in Greek, and almost no one spoke English outside Athens, "he said.  "I was very nervous and happy at the same time.  I couldn't wait to finally meet my father's mother.  I felt like my heart was going to explode.  I know that if my dad was alive, he would have been very proud of me," he added.

Before Michael left the United States, he created a photo album for his grandmother.

"It's a photo album full of pictures of me and my dad during our childhood," he said.  "When we arrived in town, we started asking people whether they had seen Maria Boukouvalas," he said.  A man working at a local coffee house told them that he wasn't good with names, but he was good with faces pointing at the table where Maria and her husband were sitting.

"It was a very emotional moment for everyone involved,"  Michael said.  After so many years, the family had gotten back together.

"We stayed in town for three days.  Everybody was so friendly and nice.  They were feeding us all the time, and of course, my yiayia asked us to stay with them.  We stayed over at a hotel.  We didn't want to impose,"  Michael added.

Michael Ebert returned to the United States hoping that, some day, he will be able to go back to Greece and visit his family again.  "It's something my father would have liked very much," he said.