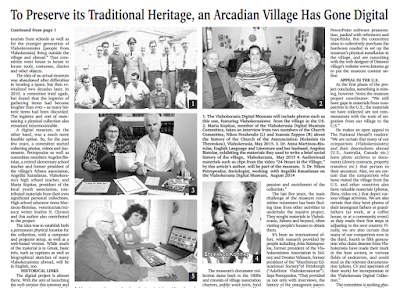 ONE ARCADIAN VILLAGE HAS GONE DIGITAL

VLAHOKERASIA, GREECE - Vlahokerasia, population 424, will soon have something most Greek villages can only dream of:  its own digital museum.  Over the course of four years, a volunteer committee spearheaded by retired Sociology/Anthropology Professor Nikos Petropoulos, has prepared a collection of images, moving pictures, and documents to share with the world, digitally.

If you've ever traveled between Tripoli and Sparta, in Greece's Peloponnese, chances are you've seen the sign for Vlahokerasia.  "To horio," or the village, as its fondly called by its sons and daughters, is in many ways a typical Arcadian village, which is much-diminished, aging population, stone homes centered around a grand church square, cafe culture, nearby olive groves, and a few lingering goat herds.  To those who hail from the village (including this author's father), each visit there is also colored by family tales of brutal WWII occupation and Civil War, painful immigration separation and the disappearing traditions of a centuries-old agricultural life.

The concept of a museum to capture and share Vlahokerasia's uniqueness has been around for a while.  Vlahokerasia Digital Museum Committee Coordinator Petropoulos notes that the idea dates back to 1991, when a group from Vlahokerasia had an actural - not virtual - folk museum in mind.  They wanted to draw attention to the village with "a museum that would contribute in a minor way to  the village by making it a center of attraction for educational tourists from schools as well as for the younger generation of Vlahokerasiotes (people from Vlahokerasia) living outside the village and abroad."  That committee went house to house to locate tools, costumes, diaries and other objects.

The idea of an actual museum was abandoned after difficulties in locating a space, but then revitalized two decades later.  In 2010, a committee tried again, but found that the logistics of gathering items had become tougher than ever - as many historic items had been discarded.  The logistics and cost of maintaining a physical collection also remained insurmountable.

A digital museum, on the other hand, was a much more feasible option.  So, for the past few years, a committee started collecting photos, videos and documents.  Petropoulos as well as committee members Angelos Bistolas, a retired elementary school teachers and former president of the village's Athens association, Angeliki Katsafanas, Vlahokerasia's high school teacher, and Maria Kopitas, president of the local youth association, contributed materials from their own significant personal collections.  High school educator Anna Martinou-Bistolas, veterinarian/science writer Stathis N. Chronis and this author also contributed to the project.

The idea was to establish both a permanent physical location for the collection, with a computer and projector setup, as well as a web-based version.  While much of the material is in Greek, basic info, such as captions as well as biographical sketches of many Vlahokerasiotes abroad, will be in English, too.

The digital project is almost there.  With the aim of launching the web version this summer and the physical version (most likely to be housed in the village school) next summer, the team is still gathering and cataloging materials.

To date, the committee has created captions in both English and Greek for over 700 photos, as well as incorporated hyperlinks to documents and videos.  With the aim of telling the story of the village from antiquity to the present, the archival task is immense.

Petropoulos explains:  "The materials have been organized into over 20 categories, including, among others, the following:  views of the village (landscape/built environment); local fruit trees; the village churches; the life cycle; the farm fields; winter settlements; threshing process; animal stocks; dough-based foods; the vineyards, water sources; traditional soap-making; community activities, the community school; the forest; activities of village associations in Athens, U.S., and Australia; omogenesis (villagers abroad); occupations; participants in wars of 19th and 20th centuries; village benefactors; the Vlahokerasiotes (people hailing from Vlahokerasia) in sciences, arts and letters, medicine, [politics, business, and the folk arts (poetry, prose, music, painting, etc.), whether in Greece or abroad, whether living or dead."

Highlighting daily village life will be an essential theme of the museum.  Says Petropoulos:  "A basic principle guiding the collection of photos was that they have to show the 'actors' engaged in some type of local village activity (for example, plowing, threshing, washing in the streams, fetching water, working in the lab or the office, making a local product etc.).  There was an exception to this principle as in the case of 'portraits' or still pictures which included past generations of villagers with traditional costumes or in some exceptional circumstances."  In rare circumstances, photos from neighboring villages are included to demonstrate certain customs or shared village practices.  The motion picture formats range from silent 8 and 16 mm film clips to more recent videos.

The museum's document collection dates back to the 1800s and consists of village association charters, public work texts, food recipes and biographies alike.  Among the historic treasures are evidence of villagers' participation in the Greek War of Independence and other major battles, early marital contracts (with dowry details) and 19th-20th century wills.  Genealogists will delight in male birth records from 1846 to 1878.

The committee isn't snobbish about the present, notes Petropoulos; "however, labeling the historical material as "treasures" does not mean that the more recent ones are bereft of value-especially for the future generation of Vlakokerasiotes."    The work will be ongoing explains Petropoulos:  "The Committee will be open to receiving new materials for the further expansion and enrichment of the collection."

The last five years, the main challenge of the museum committee volunteers has been finding time from other activities to undertake the massive project.  They sought materials in Vlahokerasia, Athens and beyond, often visiting people's houses to obtain them.

It's been an international effort, with research provided by people including John Kotsiopoulos, former president of the Vlahokerasiotes Association in Sidney and Orestes Velisaris, former president of the "Manthirean Educational Society: of Pittsburgh ("Adelfotis Vlahokerasioton").  Says Petropoulos, "They provided us not only with interviews, the history of the omogeneis associations abroad but also with documents and documentaries of village life."

Terpsie Katsafanas, a third generation Greek-American from Pittsburgh with maternal roots in the village, was valuable in pointing out the 1963 publication "Viografia Xenitelas" by George P. Zeppos, a first-generation immigrant born in Vlahokerasia who settled in Pittsburgh during the first decade of 1900s.  The book, says Petropoulos, "is an epic account of his occupational struggle for survival and success in the new land, as well as a testament of his strong bonds with the mother country."  An excerpt will be included in the digital museum.

The project now lives in a PowerPoint software presentation, packed with references and hyperlinks.  But the committee aims to collectively purchase the hardware needed to set up the museum's physical installation in the village, and are consulting with the web designer of Distomo village's website www.distomo.gr to put the museum content online.

As the first phase of the project concludes, something is missing, however.  Notes the museum project coordinator:  "We still have gaps in materials from compatriots in the U.S.; the materials we have collected are not commensurate with the scale of migration from our village to the U.S."

He makes an open appeal to The National Herald's readers:  "We are certain that many of our compatriots (Vlahokerasiotes) and their descendants abroad (U.S., Australia, Canada, etc.) have photo archives or documents (dowry contracts, property transfers, etc.) that pertain to their ancestors.  Also, we are certain that the compatriots who have visited the village from the U.S. and other countries also have valuable materials (photos, films, video etc.) that depict various village activities.  We are also certain that they have photos of their immigrant fathers or grandfathers (at work, at a coffee house, or at a community event) as they made their first steps in adjusting to the new country.  Finally, we are also certain that many of our compatriots now in the third, fourth or fifth generation who claim descent from Vlahokerasia have made their mark in the host society, in various fields of endeavors, and could send us the relevant documentation (photo, cv and specimen of their work) for incorporation in the Vlahokerasia Digital Collection."

The committee is seeking photos, documents, biographies, books, articles, video clips, etc. pertaining to Vlahokerasia, early immigrant life in the US. and other countries abroad, village association activities abroad from the early immigrant period to the present, visits to Vlahokerasia from abroad and info about Vlahokerasiotes who've made (or now make) a mark in Arts & Letters, Sciences, Medicine, Law and Politics, and Business.  Here is the contact info for any such materials/info:  Dr. Nicholas P. Petropoulos, email:  erc@otenet.gr, mailing address:  Dodecanesou 30, Athens 11363, Greece.

As the project prepares to launch, virtual Vlahokerasia could become an archival model for other Greek villages.