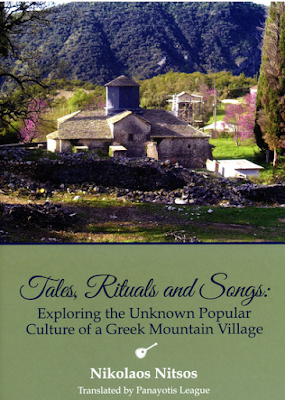 This book is about the village of Tsamantas, Epirus, Northern Greece.  Originally published 1926 in Greek.  Translated into English by Panagiotis League, Instructor of Modern Greek Studies at Hellenic College.

Being sold by Holy Cross Bookstore and the Hellenic Press.

"After the liberation of Epirus, I desired to return for a visit to my birthplace... and arrived in Tsamantas in the middle of 1914... The more I collected and studied, the more interested I became. I started to systematically analyze the relatively rich material having to do with the customs of the inhabitants, previous generations' way of life, the language and expressions, and in general to develop a tremendous interest in the folklore and history of our people"
—Nikolaos Nitsos, Dec. 1, 1925
This translation into English by Panayotis League of a long-forgotten but fascinating monograph by the late Nikolaos Nitsos, a scholar from a small village in what is now northwestern Greece, is an impressive achievement, not least because the task was made more challenging by the complexity of the original text and the antiquated form of Greek in which it was written. Its publication is a momentous event, bringing back to life a work of enormous interest and fine literary qualities.
—from the foreword by Dr. Dimitrios Konstadakopoulos
Translated by Panayotis League