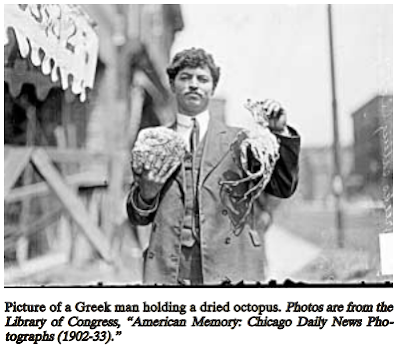 Photographs Outside of History:
What they Reveal 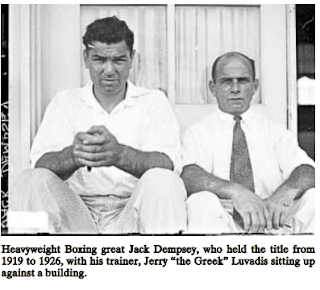 Every so often, incredibly valuable Greek American historical documents float into public view. All we have to do is wait for the unexpected to rediscover these lost historical gems.

The Chicago Daily News Photographs – 1902-33 website on the Library of Congress’ National Digital Library Program is one such treasure house of visual images. This vast collection consists of more than 55,000 images of urban life drawn from more than 30 years of news-related photography. In this vast collection of visual images, we find 28 photographs between 1906 and 1927 identified, in their meager accompanying documentation, as “Greeks.” Unfortunately, outside of the image, corresponding information is not always available.

Readers, or perhaps I should say viewers, of this site are told that one must review the microfilms of the Chicago Daily News if they wish to learn about the news stories for which these photographs were first taken. But since many assigned news stories were never published, and many more photographs of a single event taken than were ever actually used in a published article, this digital collection offers a unique collection of historical images.

Greek images outside of those identified as Greek are definitely a part of the larger collection. Just by randomly choosing subjects, I was able to find a wide array of Greek immigrant photographs. Only future research can determine the full range of images we would see and recognize as Greek from those seen by American eyes. Since the collection has little direct documentation accompanying the 55,000 images, it is a triumph of painstaking work that this array of visual materials has ever seen the light of day.

In shifting through this randomly assembled gathering of images, we find the bare bones of Greek American history. With our Greek American eyes, we can see what the American photographer and reporter may have missed because we have a cultural and historical sense of ourselves which those individuals simply did not.

Unexpectedly, we also find moments lost to our collective consciousness of ourselves.

For our first specifically “Greek” image, which is dated as 1906, we see an unidentified young man with an especially fine mustache holding a dried octopus. Standing on a public street, this posed shot must have accompanied a story where the apparently new delicacy of octopus was part of the news story. Its existence suggests American stereotypes of persons Greek.

Next, we see two photographs taken on February 26, 1907 first with Celia Demitero alone, and then another photograph of Celia with her two parents. Only Celia’s father, Angelo, is identified by name. The identification summary accompanying these two images offers the following startling report: “Celia was kidnapped by gypsies in Little Rock, Arkansas and found in Thornton, Illinois, after 11 months.”

Another set of images from 1907 illustrates how Greek images are part of the wider Daily News collection which is not identified as specifically Greek. Wrestlers George Kareoris, Sam Best and Nick Dares are seen in six separate photographs. One shows Kareoris, Best and Dares standing with arms crossed on their chests while the others show various posed wrestling holds. These crystal clear photographs are extremely valuable historical items since early photographs of Greek wrestlers are difficult to locate in public collections.

In 1911, Captain Spires Matscukas, a captain in the Greek navy, is seen holding a ship model he either built, or which shows one of the vessels he commanded. Chicago Greeks have long contended that ship captains sailing up the Mississippi River in the 1840’s were the first Greeks to see the city. Peter Pooley, from the island of Corfu, was one of these captains. In 1885, he brought his new bride Georgia (nee Bitzis) to Chicago, and so established the first Greek family in the city. Greeks were already in the city at this time, working along the Chicago River, where they sold produce, which was then arriving by ships in their stands or by push carts along the streets of the city. Was Matscukas from this wider fraternity of sailors?

Two photographs dated November 15, 1915 show Chris Manti’s fruit stand in the Streeterville neighborhood on Chicago’s Near North Side. This image is of a hand-built fruit stand with an American flag on top. Streeterville, at this point in time, was a disputed region of the city. Built on a landfill, it was unclear who legally owned this property. Manti’s fruit stand was eventually torn down. The images of this very primitive structure are priceless, since they are the only photographic evidence available of early Greek vendor’s fruit stands.

Various other photographs show a host of Greek characters and situations. Among the notables we find are Prince Paul of Greece, Greek Ambassador Charalambos Simopoulos and George DePatta, a Greek counsel.

THE PUGILIST AND HIS GREEK FRIENDS

Half of all the photographs identified specifically as Greek in the Chicago Daily News Collection show Jerry Luvadis (1885-1938) as the personal trainer of William Harrison “Jack” Dempsey (1895- 1983). Dempsey, the “Manassa Mauler,” was one of the greatest heavyweight champions in history. In 83 professional fights, he had 62 wins (50 by knockouts, 26in the first round), 6 losses, 9 draws and 6 nocontests. He lost his title to Gene Tunney in 1926, and lost again in a 1927 rematch forever remembered as “The Long Count.”

Little information exists on Luvadis. From what is available in news accounts, Luvadis was a long established figure in professional boxing. While most newspaper reporters refer to Luvadis as “The Greek,” he is also sometimes inexplicably called “Jerry the Rubber.” Time Magazine once offered this concise assessment: “Jerry Luvadis, is... incapable of reading or writing. He is a trainer of Jack Dempsey, (and) is famed for a perfume stronger than ammonia, which he uses in large quantities (August 20, 1928).”

Dempsey and his immigrant trainer appear in 14 different Chicago Daily News photographs between 1926 and 1928. Other images of the two men together can be seen in this collection by searching under Dempsey’s name. Eleven photographs of Dempsey, seen in the Daily News photograph collection with various people, are dated simply as 1927. While no published information is available, it is safe to assume that they were all gathered to welcome Dempsey to Chicago. As we learn from the little documentation that does accompany a few of these images, Dempsey was in Chicago to promote an upcoming fight and to train at the Lincoln Fields Race Track in Crete, Illinois.

These images were taken of Dempsey as he was in training camp for an upcoming fight. It seems that these photographs document the period just before Jack Dempsey’s infamous rematch with Tunney in Chicago on September 22, 1927.

Aside from what this grouping of photographs can report about the history of American sports, they simultaneously document Greek American history.

Jack Dempsey’s considerable involvement with the wider Greek American community in America is regrettably lost to our collective consciousness. Sometime between 1926 and 1928, both Dempsey and Luvadis were inducted into AHEPA as members of the Pullman chapter in Chicago. A long photograph of the Dempsey/Luvadis induction dinner, along with all their new Ahepan brothers, is held by the Hellenic Museum in Chicago.

As one might have expected, Dempsey also knew Nick Dandolos, the fabled gambler dubbed in his own lifetime by the American press as “Nick the Greek.”

One intriguing moment in Dempsey’s relationship with Luvadis was when the two were on Broadway together. The drama, “The Big Fight” played for a total of 31 performances at the Majestic Theater from September 18, 1928 to the last show sometime in October of that year. Dempsey played the role of Jack Dillon, a boxer known as “The Tiger,” and Luvadis played himself, and was billed as “Jerry the Greek.” While only a lark, this production underscores how closely these two men were linked in the American imagination at the time, as well as how Luvadis was instantly recognizable as “Jerry the Greek.”

Jerry Luvadis died in New York City’s Welfare Hospital in September 1938, after a long battle with cancer. In the New York Times coverage of Luvadis’ death, it was noted that “Dempsey often spoke of the loyalty of the Greek trainer, rubber and second. He had paid for his medical treatment for several years. After the fight, in which he lost the title to Tunney in Philadelphia in 1926, he gave Luvadis $12,000 (September 7, 1938).”

So what do all these photographs potentially mean? With so little information preserved for any of the Chicago Daily News Greek images they are, for the moment, largely photographs outside of history. Greeks need to actively engage with the very documents which constitute their history in North America. If they do not – and with no one else bothering to do so – it is only logical that a vast amount of historical information will be lost forever. If that proves to be the case, then Greek Americans will only possess these few and unidentified images in the future, never knowing who we were or what we even thought of our own ancestors.