A Political History of Modern Greece 1821-2018 by Aristides Hatzis 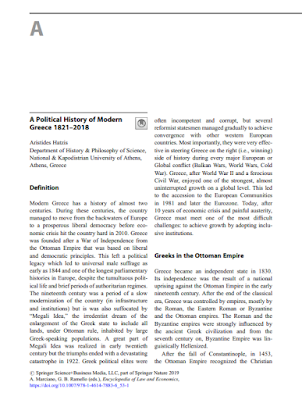 The following article is available through www.academia.edu
A POLITICAL HISTORY OF MODERN GREECE 1821-2018
by Aristides Hatzis
Department of History & Philosophy of Science,
National & Kapodistrian University of Athens, Athens, Greece
Excerpt from article:

Modern Greece has a history of almost two centuries. During these centuries, the country managed to move from the backwaters of Europe to a prosperous liberal democracy before economic crisis hit the country hard in 2010. Greece was founded after a War of Independence from the Ottoman Empire that was based on liberal and democratic principles. This left a political legacy which led to universal male suffrage as early as 1844 and one of the longest parliamentary histories in Europe, despite the tumultuous political life and brief periods of authoritarian regimes. The nineteenth century was a period of a slow modernization of the country (in infrastructure and institutions) but is was also suffocated by “Megali Idea,” the irredentist dream of the enlargement of the Greek state to include all lands, under Ottoman rule, inhabited by large Greek-speaking populations. A great part of Megali Idea was realized in early twentieth century but the triumphs ended with a devastating catastrophe in 1922. Greek political elites were often incompetent and corrupt, but several reformist statesmen managed gradually to achieve convergence with other western European countries. Most importantly, they were very effective in steering Greece on the right (i.e., winning) side of history during every major European or Global conflict (Balkan Wars, World Wars, Cold War). Greece, after World War II and a ferocious Civil War, enjoyed one of the strongest, almost uninterrupted growth on a global level. This led to the accession to the European Communities in 1981 and later the Eurozone. Today, after 10 years of economic crisis and painful austerity, Greece must meet one of the most difficult challenges: to achieve growth by adopting inclusive institutions.

Greeks in the Ottoman Empire

Greece became an independent state in 1830. Its independence was the result of a national uprising against the Ottoman Empire in the early nineteenth century. After the end of the classical era, Greece was controlled by empires, mostly by the Roman, the Eastern Roman or Byzantine and the Ottoman empires. The Roman and the Byzantine empires were strongly influenced by the ancient Greek civilization and from the seventh century on, Byzantine Empire was linguistically Hellenized.