Literary Review - The Miracle: A True Story by Leonidas Koumakis 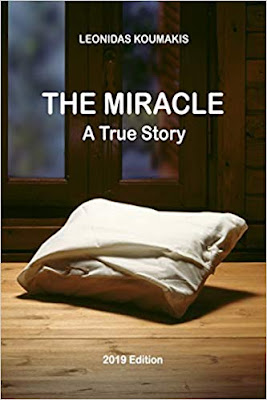 THE MIRACLE:  A TRUE STORY

Published in The National Herald, August 3, 2019

The Miracle: A True Story by Leonidas Koumakis is a compelling memoir and history of what the Greek minority in Turkey that has endured from the end of the 19th century to the present day. As noted in the book’s description, “The purpose of this book is to communicate, through both historical evidence and personal experiences, the Turkish policy against Hellenism and beyond.”

With an impressive bibliography of over 200 sources, the book was originally published in Greek in 1993 with its fourth edition printed in 2008. The first edition English translation by the Association for the Protection of National Heritage with final revision by Kathy Spiliotopoulos appeared in 1995. A second English translation by Pat Tsekouras was published in 1996. The third English edition was published in 2019 with an updated introduction which outlines the history of modern Turkey and the rising tide of nationalism that helped fan the efforts to oust its minorities through whatever means necessary, including violence and intimidation, in spite of the Treaty of Lausanne. The once vibrant Greek community of Constantinople went from about 200,000 in the early part of the 20th century to just about two thousand today.

As Koumakis writes, “I am well aware that amidst the vast array of enormous problems facing the world, a small voice such as mine has an infinitesimal chance of being heard. But I have faith in the timeless human virtues of Truth and Justice, even under hopeless circumstances. I believe that even today, these virtues are worth fighting for.”

The first chapter opens with a poignant scene between the young Koumakis and his mother where she admonishes her son for speaking Greek in public in Constantinople in September 1964. The author then flashes back to four years earlier to tell the harrowing story of his uncle, a shopkeeper who was arrested and beaten for his store being open on a public holiday. Because his uncle had “plenty of gold,” he was able to post bail and then fled for his life to Smyrna and then to Chios.

Koumakis himself and his immediate family also suffered intimidation and eventually left their home. Their property was confiscated except for a large trunk of clothes.

The events of the Septemvriana, September 6, 1955, also highlight the effort to rid Turkey of its Greek minority population. The destruction of Greek-owned businesses and property was something very few of the Greek residents could recover from and many chose to leave rather than try to rebuild. Koumakis writes, “I still remember that appalling night as if it were yesterday; I remember being huddled in terror in a corner of the flat roof of our house, waiting for our turn to come. And indeed, at around 11 o’clock the night sky, already thick with smoke and fire wherever you looked, was suddenly filled with fearful cries of “death to the giaours [infidels]! Death to the giaours!”

The family managed to survive that night, thanks to a neighbor’s intercession with the angry mob, but eventually, they were forced to leave their home. The miracle, which lends its name to the book’s title occurred a few years later as officials searched through the belongings, mostly clothes, they were allowed to take with them on their way to Greece.

The Miracle: A True Story by Leonidas Koumakis is available online