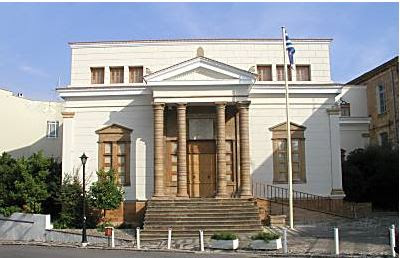 The Koraes Library of Chios is one of the largest in Greece with a significant collection exceeding 130,000 volumes. It was established in 1792, as a department of the Great Chian School. The first books were donated by Adamantios Koraes and many of his friends, mostly Greek living abroad.
Before the Massacre of Chios in 1822 it was the most important library of the whole region. After a major earthquake in 1881 it was moved into a new building where it has remained ever since. Initially the building had only one floor; the second one was added after 1948 by the major donator Philip Argenti. Important upgrades and additions took place in the period 1975-78, again with initiatives by the Argenti family.
Besides its founder, Adamantios Koraes, also many other Chians donated their personal book collections to the Library. Important donators include Ioannis Andreadis, Zorzis and Tarse Dromokaitou, Alex. Pachnos, Georgios Michalinos, Alex. Votsanis, Leonis Kalvokoresis, Georgios Theotokas, Phil Argentis et al.


Today the Adamantios Koraes library reports to the Libraries Department of the Ministry of Education and Religious Affairs. A comprehensive catalogue and archives of the Library’s book collections are available. The Koraes Library has also a lending department and a mobile library van for the villages of Chios.

During the last years, the Library has put many efforts in providing the researchers and visitors with new more versatile and easy ways to access it’s collections, and in improving the preservation and proper storage of the invaluable archives of rare and old manuscripts and books. Modern technology is utilized in various ways to ensure the usefulness and efficiency of the Library.

In the same building, second floor, you may visit the Argenti Folkore Museum, exhibiting clothes and implements of everyday life of Chians during 17th to 19th centuries.
Opening Hours for both Koraes Library and Argenti Folkrore Museum: Monday – Friday 08:00-14:00, Saturday and Sunday closed
Tel. +30 22710 28256

Ticket: 1.5€. Free entrance for Greek pupils and students as well as for employees of the Greek Ministry of Education.
Information from Chios Online
Chios Library Museum