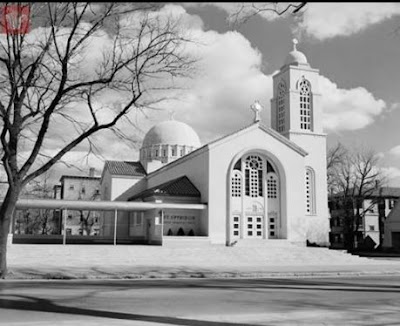 This profile was published in the November 5, 1998 Orthodox Observer, and can be read in full online - Page 19 - https://www.goarch.org/-/november-5-1998-orthodox-observer

The Bay State's second largest city of some 200,000 mostly Roman Catholic residents, nestled among some of these hills in the center of the region, also reverberates with the vibrant presence of the Orthodox faith, represented by some 15,000 faithful among nine jurisdictions.

Foremost among these is the parish of St. Spyridon Cathedral, the largest Orthodox church in the area.

Over the years, this mega-parish has played a key role in fostering Orthodox unity, and has contributed greatly to the nurturing of the Archdiocese.

The community is diverse, with a combination of immigrants, first, second, and third generation American-born and converts.

Most immigrants came from Epirus and Kerkyra.  The most famous, and active, members is former New York Times correspondent and author Nicholas Gage, of nearby North Grafton,m who wrote Eleni and A Place for Us.  His sisters, central figures in the story, also live in the area and are parishioners.

The first Greek Orthodox men who arrived in the 1890s and early 1900s came to work in the area's hundreds of textile mills and other manufacturing plants.

At the time, there were nearly 4,000 Greeks in Worcester, but only 25 families, according to a parish history.  Before 1914, they worshiped at St. George Syrian Orthodox Church.

In the parish's first year, priests from other churches visited Worcester to hold services.  The chuch board asked the Holy Synod of Greece to send a permanent priest and Fr. Vasilios Papanikas arrived in early 1915.

The parish received its charter from Massachusetts in 1916 as St. Spyridon Church, taking its name from the saint whose body is still preserved on Kerkyra.

Parish finances at the time were very primitive.  There were no dues, but for every loaf of bread eaten, households would pay one cent to the church.

Bakers were required to note the quantity of bread used and a "church collector" would make monthly visits to each house.  Amounts collected ran as high as $250 to $300. . . . .