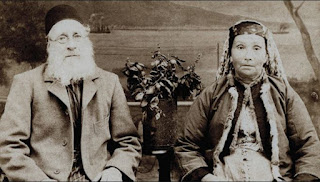 Jews may have first settled in Greece as early as the Hellenistic Period, using the Greek language in their daily life after extensive contact with ancient Greek culture, the dominant culture in Palestine at the time, and established firm ties with Greece.

According to information recorded in the historical archives of the Greek Foreign Ministry (Documents on the History of the Greek Jews), after the Jewish state came to an end under the Roman rule in 63 BC, many Jews left Jerusalem, and some of them migrated to Greece, where they joined the Romaniotes (Greek-speaking Jews) who were already established there, mainly on the islands of Crete, Rhodes, Cos and Delos, and in the cities of Corinth, Athens, Sparta, Ioannina and Chalkis.

From the 14th century, the Romaniotes were joined by Ashkenazi refugees from Central Europe. The first groups came to the city of Thessaloniki from Hungary in 1378. Sephardic Jews, expelled from Roman Catholic Spain, first appeared in Thessaloniki in 1492.

Throughout the Greek War of Independence in the 19th Century, Jews aided the Greek cause and many fought as soldiers in the Greek army, as they did later in the Greek campaigns between 1911 and 1922. Unlike the Romaniotes, who asserted their Greekness and adapted to the Athenian environment, the Sephardic Jews formed a separate constellation within the decentralized Ottoman system, which permitted them to flourish, in Thessaloniki, where they eventually constituted a majority of the population. Between a devastating fire in 1917, which left many people homeless, and the 1922 evacuation of Asia Minor and the flight of its indigenous Greeks to mainland Greece, the Jewish community of Thessaloniki suffered the most among the Greeks who lost their homes, businesses, property, services and important monuments in the city.

During the First World War, nearly 13,000 Jews from all parts of Greece were drafted into the army, and 513 died in battle. In the Second World War, arrests and deportations began in Thessaloniki in March of 1943, and they were made easier when Chief Rabbi of the city, Cevi Koretz, surrendered the archives of the community to the Germans.

Even more tragic was the fate of Jews in the Greek territories of eastern Macedonia and western Thrace, held by the Bulgarian allies of Germany, from where they were deported and later exterminated in Treblinka.

After the Italian armistice of September 1943, the Germans tried to locate the Jews of Athens. A universal refusal to hand them over to the occupation authorities and organized efforts saved most Athenian Jews. The EAM-ELAS resistance movement, Archbishop Damaskinos of Athens, Athens Police Chief Angelos Evert, in cooperation with the British, all worked together to save the Jews of Greece, along with the efforts of ordinary Greek citizens. After the repatriation in 1945 and 1946 of those who survived the death camps of Poland and some 8,000 who emerged from the Greek underground, only 10,000 Greek Jews survived out of a total of 70,000.

Immediately after the liberation, the Greek State passed legislation for the restitution of Jewish properties to their legal owners and appointed the Jewish communities as administrators of all property whose legal owners had perished or were lost without trace. In 1944, the Cabinet of George Papandreou resolved that all Jewish property which remained in abeyance due to the absence of heirs, up to and including the 4th degree, was not to revert to the sate, as laid down by law, but was to be ceded to a common fund for the rehabilitation of indigent Jews (Law 846/1946). Three years later, the Cabinet resolved to grant the sum of 8 million drachmas as a first installment to meet urgent educational and religious needs of the Jewish communities.

Winston Churchill wrote, “The Greeks rival the Jews in being the most politicallyminded race in the world… No other two races have set such a mark upon the world. Both have shown a capacity for survival, in spite of unending perils and suffering from external oppressors, matched only by their own ceaseless feuds, quarrels and convulsions. The passage of thousand years sees no change in their characteristics, and no diminution of their trials and their vitality. They have survived, in spite of all that the world could do against them (Triumph and Tragedy, Vol. V, Book II, pages 532-533, Houghton Mifflin Company, Boston: 1951).”

“Documents on the History of the Greek Jews,” BY Greek Foreign Ministry and the University of Athens Department of Political Science, researched and edited by Photini Constantopoulou and Professor Thanos Veremis (Kastaniotis Editions, Athens: 1999)

“The Jews of Greece,” by Nicholas Stavroulakis (Talos Press, Athens: 1990)

“The Illusion of Safety - The Story of the Greek Jews During the Second World War,” by Michael Matsas (Pella Publishing Co., New York: 1997)

“548 Days with Another Name,” by Rozina Asser-Pardo (Gavrielides Editions, Athens: 1999)