BOSTON - Finding her biological family was a life's dream for coffee house manager Melissa Jackson. After 33 years, the dream has started to come true, and it's a dream with a distinctly Greek twist.

Mrs. Jackson's life story could have very easily been turned into a Hollywood script, but it's as real as it gets, so it would have been a script based on a true story.

The California-raised 33-year old was adopted by an American family from a poor Greek family when she was still an infant. “I was given up for adoption in Athens, Greece by my mother Georgia Boura,” Mrs. Jackson told the National Herald.

Her adopted parents, Jack and Lee Jackson, were in Greece at the time. Mr. Jackson served in the United States Air Force and was in Athens on assignment. “My parents couldn't have children, and had long wanted to adopt a baby, so they inquired at a hospital in Athens about adoption policies,” she said.

Melissa had just been born there prematurely at the time. “I was 3 pounds and 12 ounces, but I survived. I was adopted when I was only five weeks old,” she said.

It all happened very fast, she said. “There was an ad in a newspaper; my parents came to the hospital; they saw me; and then went to my (biological) mother's house,” she said.

Her mother was very poor, and was living in a small house with her other children. “She couldn't afford to keep me. She had to give me away,” Melissa said. “They all lived in a very small house, with no money. I had a sister, Maria, who was 3 years old at the time, and a brother, Vassilis.”

She said that a friend of her adoptive parents, Bob Hill, who worked as a missionary in Greece, helped the Jacksons with translating and negotiations at hospital. The papers were signed expeditiously, and Melissa became an adopted child.

For the next two years, the Jacksons and their baby stayed in the Athenian suburb of Glyfada. They then moved to Duarte, California where the little girl attended a Christian School.

She said her adopted parents never concealed her adoption from her. “They always told me that I was special,” she recalled. “They used to say I was a 'present from Greece,' and made it sound like a very special thing to be Greek.”

As she was growing up, however, Melissa needed more specific answers.

She told the Herald that, during her teenage years, she experienced a great sense of anxiety about the fact that her biological parents had given her away. “As a teenager, I often felt that they gave me away because they didn't love me,” she explained. “In my early twenties, I developed a strong desire to meet my biological mother. On the other hand, I wasn't sure whether I would be able to handle it emotionally,” she said.

“It's a great thing to be adopted by somebody who wants you and loves you, but even if you have been loved and have had a good life as an adopted child, I think that you still experience a sense of emptiness because you don't know who brought you into this world,” she added. “Whose eyes do you have? Who do you look like?”

After 33 years of wondering, she finally insisted on answers to those questions three months ago. Melissa went to seek assistance from her adopted parents' old friend, Mr. Hill, who once again became an instrumental mediator in helping her. But this time, it was in order for her to be reunited with her biological family.

By the end of the following month, Mr. Hill had returned to Greece and had taken action. “He went to the Antennae television network, which jumped on the story immediately,” Melissa said.

Melissa's friend, Risha, was also very encouraging. “She introduced me to Dina Giannikis, a teller at Union Bank of California, this past summer, who also took my papers to the Antennae program, 'You Have a Letter.' ”

By December 22, Melissa, along with her friend Risha, was on a plane to Greece for the first time in her life.

The station had located a member of her biological family, her elder sister Stamatia, who didn't even know of her younger sister's existence. Stamatia was ten years old when Melissa was adopted, and was not living with her mother at the time the new baby was born. “She was living with her father, so she had no idea about me,” Melissa said.

Stamatia was flown to the television station from Crete. “She had never been on a plane and came on the air without knowing the reason why,” Melissa said.

When Melissa showed up, her sister recognized one of her features. “She kept saying I had her mother's eyes,” Melissa recalled. “I don't know any Greek, so I had no idea what was going on.”

Soon, however, both women found out the truth about one another. “We embraced each other, kissed and hugged and cried, we just connected. She called me her 'baby,' and all we could say was 'I love you, I love you,' and held hands for hours.”

It was then that Melissa found out the truth about her mother and the rest of her family.

“My mother passed away 28 years ago in Chicago, Illinois from a heart attack. She was visiting my brother Vassilis, who had immigrated to the United States at age 19.” Tragically, Vassilis also died two years ago, at 43, from the same condition which afflicted his mother.

“Stamatia and I talked about the conditions my mother lived in; how poor she was; how much she loved me; and that she cried for a long time after she gave me away. My mother worked for Olympic Airways as a cleaning lady, and that's how she was eventually able to fly to Chicago. All my life I thought I would be happy just to have her picture. I have two pictures now,” Melissa said.

The following day, Melissa met Maria. “She was hesitant at first,” she recalled about meeting her other sister.

Stamatia told Melissa that she and Maria could be twins.

Melissa said she is now “the happiest that I have ever been. I have made peace with myself. Now, I have a blood family,” she said.

She is now embracing her Greek heritage, which she missed out on all these years. She told the Herald that she is now enrolled in College to become a police officer. She said she started working fulltime at the age of 16, and neglected her education.

“I moved out of the house when I was 18, but unfortunately, I didn't go to college. I'm the general manager of a coffee house. I have about 20 employees who work under me,” she said.

Hellenism is now part of her life and her education.

“I am learning Greek with the help of CD's and a computer program. I was going to enroll at Greek school, but I can't because I work 55 hours a week. But I'm also listening to Greek music, and I really love it, and I'm very interested in learning about Orthodoxy. I want to learn everything about my people and heritage,” Melissa said.

She is having a hard time pronouncing her sister Stamatia's name, she added, and there are even more names to learn now. “I met my first cousin, Vivi. She gave me a gold pin that has been passed down in the family.”

“I hope he reads the National Herald. We all have different fathers, and that's what hurts. My mother was married three times. My biological father was considerably older than my mother,” she said.

“But I want to meet him. All I know is they called him by his nickname, 'old man.' I don't know his real name yet.” 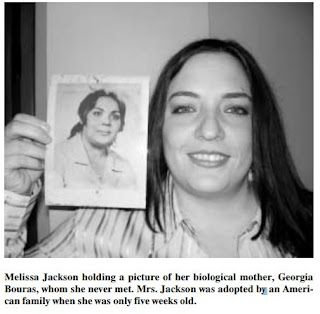