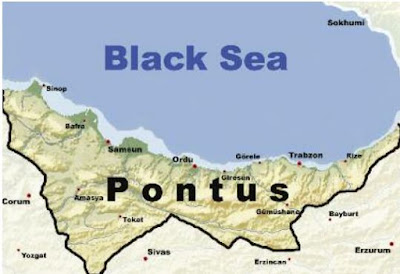 In February 1919, Constantine G. Constantinides and Socrates Oeconomos submitted a memorandum on behalf of the Unredeemed Greeks of the Euxine Pontus to the Paris Peace Conference, claiming an independent republic along the shores of the Black Sea. They would have been influenced by President Wilson's 14 points, especially Point 12, which would allow minorities under the Ottoman rule to determine their own "autonomous development." The British were unimpressed with the Pontian claim.

Pontus was once a part of the Byzantine Empire but became an independent state when the crusaders took over Constantinople in 1204. It became known as the Empire of Trebizond of the Comnenes before falling to the Ottoman Turks in 1462. Despite persecution, the Greeks maintained their identity, language, and customs in such adverse conditions. Some Greeks converted to Islam who outwardly professed their Muslim faith but in private maintained their Orthodox faith. Such individuals were known as Crypto-Christians and also referred to as Stavriotes. They kept their Christian faith secret thus avoiding Turkish retribution.

Before World War 1, Pontus had an estimated population of 700,000 Greeks excluding 350,000 who escaped Turkish persecution by seeking refuge in countries such as the United States. Some 200,000 were ready to return from the Caucasus. The Pontian delegates believed they had the population to form a viable state.

The Greeks were a prosperous community with numerous churches, charitable institutions, and schools. These institutions were funded by wealthy Greek merchants, bankers, and lawyers. Greeks dominated commerce with the Pontian memorandum mentioning that the Ottoman Government was only interested in collecting taxes. It did nothing to improve the infrastructure of the region with roads, bridges, and ports falling into disrepair. Failure to invest in new infrastructure could harm trade along the Black Sea.

From an ecclesiastical perspective, Pontus was divided into six dioceses: Trebizond, Rodopolis, Chaldea, Neocesarea, Amassia, and Nicopolis and Cesarea, each having one archbishop as its head. There were 1850 churches, 1400 schools, 2650 professors and 60,000 students in Pontus which served the spiritual and educational needs of the community.

During the First World War, the Young Turks first turned their attention massacring the Armenians and next came the turn of the Greeks. In Pontus, Greeks were conscripted into labor battalions with many of them perishing from hunger, malnutrition, exposure, and torture. Properties were arbitrarily seized, wholesale massacres took place, looting and burning of villages and entire populations forcibly relocated into the Anatolian interior.

Archbishop Germanos (Amassia) estimated that around 160,000 people had been deported in Euxine Pontus by the Young Turks. It is worth noting that Germanos mentioned that the towns of Sinope, Ayadjik, and Karza including villages were evacuated with inhabitants relocated to Castamoni. Most perished on their way from "fatigue and ill-treatment."

In January, 1917, the men of Baffra were deported leaving women and children without food or money. The men marched through deep snow, perished due to cold weather and lack of food. Residents of Samsun, Tripolis, Kerasunda and Karahissar suffered the same fate as their compatriots in Sinope and Baffra. However, Trebizond was spared when the town fell into Russian hands in April 1916. The Russians abandoned Trebizond after the Bolshevik revolution in November 1917 with Greeks following them into Russia. Those who stayed behind suffered a cruel end.

The Pontian Greeks supported the allies in the World War I. A small guerilla force was established around Samsoun region which caused lots of problems for both the Young Turk and Kemalist regimes between 1916-23. They formed a volunteer force in Russia fighting in the Caucasus against the Turks and joined the French foreign legion fighting on the western front in France. Those who lived in America enlisted in the U.S. Army.

Constantinides and Oeconomos believed they had a strong case regarding Pontian territorial aspirations. If granted, it would remove “discontent and trouble which would continually threaten peace in the East."

The noted British historian and a member of the British peace delegation, Arnold J.Toynbee commented on the Pontian memorandum. He agreed with the early history of Pontus and atrocious treatment meted out to the Greeks by the Turks. He was an authority on the Ottoman Empire and compiled the famous British Blue Book dealing with the Armenia Genocide in 1916.

Toynbee questioned the population statistics of Pontus highlighting that the Greek element constituted 30% with the Armenians 5% and Turks 65% of the total population. The Greeks were concentrated in separate communities along the coast. It would have been difficult to establish an independent state with a majority Muslim population under Greek rule.

He identified three regions that would compose the proposed Pontic state. The first region Lazistan composed 98% Georgian-speaking Muslims which should have joined Georgia. The Greek element was nonexistent; secondly, Trebizond contained a majority Turkish population of 65% compared to the Greeks 30% and Armenians 5% respectively. Eleftherios Venizelos favored the inclusion of Kerasunda and Trebizond with Armenia granting the latter access to the Black Sea; and finally, the Sanjak (Province) of Djavik contained an overwhelming Turkish population. The Greeks and Armenians living in Djavik could leave and "migrate to Ottoman territories assigned to Armenia and Greece." Toynbee believed that most of the inhabitants would stay and" a mandatory power will have to protect them." The British hoped that the United States would be that mandatory power for the whole of Anatolia which never eventuated.

The idea of a Pontic Republic proved to be a phantom with the allied powers simply ignoring the Pontian claim. Euxine Pontus was never included in the Treaties of Sevres 1920 or Lausanne 1923.