The Sourapas Family of Seattle: A Toast to Family, Friends, and Work 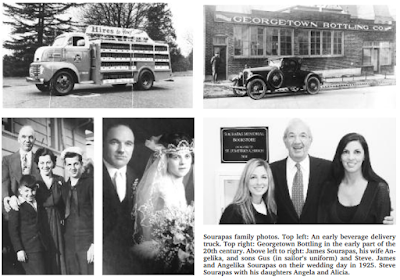 THE SOURAPAS FAMILY OF SEATTLE:
A TOAST TO FAMILY, FRIENDS, AND WORK

A Seattle Greek Immigrant Family's Soft Drink Business, by Steve (Stavros) J. Sourapas with Rosanne Gostovich Royer, is a complex story that immediately catches the reader's attention and keeps it throughout. This tale encompasses three generations of the Sourapas family as well as offering a detailed but clearly rendered account of the daily trials, long-term tribulations and deep lasting satisfaction of maintaining a soft drink business. Researchers, the world over, dream of finding such detailed narratives of any successful confectioner, restaurateur or other self-made independent businessman- that showcases such daily (let alone generational) experiences in real world conditions.

The tale of this extended family and their collective experiences draws the reader into its telling by yet another layer of documentation. This hardbound volume measures 8 3/4” x 11 1/4” with 310 pages of heavy glossy interior paper stock. This chosen paperstock offers the surface by which the color photographs and even black and white images seem to jump off the page with amazing clarity. Technically, this visual clarity is due to the weight and composition of the paper. The ink hits the surface of this kind of paperstock as a round circle (rather than a football shape typical of daily newspaper paper stock) causing all the illustrations to visually leap off the page with a clarity rarely seen expect in the finest of high-end art publications.

The composition of this multigenerational tale is structured as follows: An Introduction; Coming to America; Settling in Seattle; the Family Business; The Family, Employees; Community and Charity Promotions; Regulatory and Legal Issues; Affiliations and Awards; Subscriptions and Business References; Soft Drink Overview U.S. & Seattle; Sale of the Business; Steve Sourapas, Collector; The Sourapas Family Today; Timeline (Sourapas Business and Family Timeline); then Acknowledgments, Bibliography and References, and Index. This bare outline reveals little about how this engagingly written account is, at all times, a people first narrative.

This tale of family and business is raised to a new level by virtue of the complex visual mix of text with historic photographs, newspaper accounts, judiciously selected business stationary, charts and correspondence, Greek business directory entries, samples of advertising and a host of photographs of individuals, newspaper clippings, business machinery and office buildings offers a stunning collection of real world documents to our attention. Aside from this volume's obvious contributions to Greek American studies, the local commercial history of Seattle and certainly anyone interested in long term American industrial development and change Sourapas' lifelong fascination and collection of soda related advertising, bottles and other paraphernalia/memorabilia makes this volume a treasure trove for collectors.

Nevertheless, this volume is ever a Greek-American tale given that Sourapas freely attributes the company's (and his own) success to the example set by his immigrant parents and by extension the Greek community in which he wasraised. Given that thistale is- at all times- a highly detail oriented account Sourapas is always careful to acknowledge the dedication and long-term daily contributions of the generations of the company's American-born office and factory workers. Radical Greeks in Greece (and elsewhere) would be well served by carefully reading Sourapas' full acknowledgment of how the bottling business he and his family ran would have been far less successful without the dedicated attention of those who (technically) worked for his family. While this may seem a common sense acknowledgment of work site contributions one would be hard pressed to find such a business-based account that places the input of bosses and workers on an equal footing.

Readers who might be uninterested in the Greek-American aspects to this account but who are ardently taken with to historical memorabilia will be given a rare visual treat since Sourapas has been a systematic collector of Hines Root Beer bottles, advertising poster art and other such materials. Coupled with photographs of business related correspondence, work scenes, delivery trucks and events we are offered a complex visual documentation of this very same company stretching back across three generations.

Sourapas is very clear about the fact that he would not have been able to write this kind of generational history were it not for the fact that his parents (and various other family members) were not also given to keeping documents, business papers photographs and other items on which he was able to base his extremely detailed narrative. It was this prior example of attention to precise details and the documents which afforded this attention substance that influenced his own fascination with such daily business memorabilia.

For those who attend to Greek-American historical business venues and culture, the presence of Greek immigrants and their descendants in the manufacturing of soft drinks in the Deep South as well as the Great Northwest is well known. While it is perhaps true that Greeks as the manufacturers and/or distributors of beer and liquor in large cities are more familiar to the average Greek-American, the overall role of Greeks in the production of food and drink is largely ignored.

Given the little that I have related so far on this impressive volume it should be no surprise that the Sourapas family would associate themselves with someone of the experience and expertise of Rosanne Gostovich Royer as a guide and fellow worker on this exceptional project. 'Royer was born in a coal mining community of northwestern New Mexico to Serbian and Croatian immigrant parents. She has degrees in Russian Language Education and East European Studies. A founder of the Ethnic Heritage Council of Seattle, she urges families to leave a legacy by writing their personal histories and that of their communities. Royer has assisted numerous'first writers' in the writing of their memoirs and novels. As Royer reports, “It has been an immense pleasure and honor to work with Steve Sourapas , who has exemplified such a commitment to telling his story.”

Working together, Sourapas and Royer offer us a wealth of work-place information rarely documented let alone seen in such incredible detail. Without question this is the kind of precise eye-witness account Greek-American historians wish they had for the confectionery business, the restaurant trade, or the Greek involvement in the American tobacco industry. Unexpectedly, from the Reader's stand point, the daily details of work conditions found in this account are elevated by the incredible wealth of visual evidence.

My only critique to this overall project is that given the private publishing, copies of this historical volume may be hard to find. The best manner I know of is via email: angelasourapas@hotmail.com

Yet, once again, this feature is also a standard element of the Greek-American histories now being written and produced—virtually on a daily basis. These historical accounts are created to be shared among the author's family, extended family and those who formed the writer's “community,” non-Greek as well as GreekAmerican. The ever competitive nature of Greek and Greek American daily interaction limits very often how much praise can be given any one individual or project. For my part, I believe this book to be one of the finest written and visually augmented Greek-American histories yet published.