GROWING UP IN ASTORIA: RECOLLECTIONS OF A GREEK-AMERICAN YOUTH 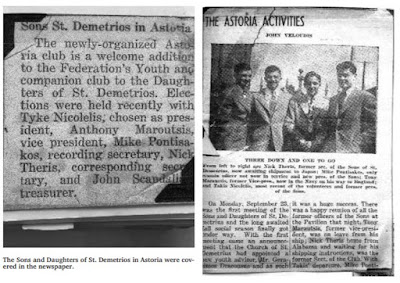 GROWING UP IN ASTORIA:

RECOLLECTIONS OF A GREEK-AMERICAN YOUTH

published in The National Herald Jan 9, 2021

I lived my formative years in the mid 30’s and 40’s with my parents and my sister Vasilea in a three-story, six-unit apartment building. Our unit was the front two-bedroom apartment on the third floor. The apartment rented for $40 per month.

My best friends were all Greek-American boys, each of whose parents had migrated from Greece or from Asia Minor. All of our parents became American citizens, first generation Greek-Americans.

The meeting place for me and my best friends was the Saint Demetrios Church on 31st Street in Astoria. Going to church and meeting after the Liturgy was a Sunday ritual. During those years I believe that the Astoria community was the largest parish in the Greek Orthodox Archdiocese of America. As a matter of fact, Archbishop Athenagoras’ offices were in a three story, wood framed house, only a five-minute walk from the Saint Demetrios Church.

I remember our first priest was Father Polyzoithes. He wore a salt and pepper goatee. He was followed by Father Kokinakis with Father Finfine as our second priest. Father Polyzoithes frequently visited church families that lived close to our church. Among his favorite watering holes were the homes of the Margarites, Baralis, and Kostir families.

It was a time before GOYA had been established for Greek Orthodox youth.

I met and bonded with my best friends when I joined Troop 23 of the Boy Scouts. Our weekly, Friday afternoon meetings were held in the basement of the Saint Demetrios Church. There was Michael and George Pontisakos, George Kalpakis, Artie Turnas, Jimmy Grontas and Tony Maroutsis. I have found and maintain contact with their next generation.

Getting back to our four room apartment on 35th Street in Astoria: our kitchen was the most important room in our apartment. We had a large white cast iron sink, a high double compartment washtub which had two hinged enameled covers and a built-in cupboard along one wall, a foureyed, cooking range with an oven on a second wall and a dumbwaiter and an icebox on a third wall. The door into our kitchen and our expandable enameled-top table with wood legs were along the fourth wall.

The kitchen was where my mother prepared our family meals. They were delicious, olive oil based cooked meals. The kitchen table was where she mixed the dough and handshaped each of her Mikrasiatika (Asia Minor) koulourakia. They were a dry, four-inch long cookie, and her finikia were a flattened, football shaped, syrup-soaked cookie baked with an embedded half walnut.

On holidays and on name day receptions, my mother made the layered filo and crushed walnut filled baklava. Loukoumades were another of her specialties. They were a winter, Sunday, breakfast treat.

The kitchen table was also where my mother laid out fabric and traced the McCall pattern pieces with white tailors marking chalk. The pieces were assembled on our foot pedal activated singer sewing machine which was kept in our bedroom. My mother cut and sewed all of her and my sister’s dresses – that is, until Vasilea, my sister, took over. She began designing and sewing her own dresses while she was still a student at Washington Irving High School in Manhattan.

My mother was a working mom. Her cutting and sewing skills enabled her to obtain work as a –‘finisher’ in the fur industry. In that capacity, she cut, assembled and stitched satin linings into assembled fur garments.

A good number of Greek immigrants were employed in the fur industry in Manhattan in the 30’s and in the 40’s. Many fur workers were from Kastoria in Greece and from Asia Minor. They worked as operators, nailers, or finishers. Unfortunately, the fur industry was seasonal and it did not offer steady employment for those skilled workers. Local 70, was the Greek fur and leather worker’s union of the AFL/CIO.

My father also made good use of our kitchen. It was where he kept a large wooden barrel full of fermenting grape mass. At a given point, determined by a hydrometer test reading, the mass was loaded and sealed tight into a borrowed copper still which had been placed over the large eye of the kitchen range. That began the slow drop by drop process in the production of our own ouzo. It was my introduction to college chem lab 101.

It was also where he developed and printed photographs he had taken with his large bellows, Kodak camera. I can see him now in the darkened kitchen illuminated only by a red colored lamp, swishing the exposed film up and down in a hypo solution in a black bakelite pan until the film became translucent. My father would then hang the wet developed strip of negatives on the wire clothing drying rack with a clothespin. The wire rack hung just inches below our plastered kitchen ceiling. The wire clothes rack could be raised or lowered by a combination of a pull cord and pulley.

Our Sunday meals were prepared by my father. That would have been either a boiled/baked chicken with a first course of avgolemono, egg/lemon soup. Or a roast leg of lamb with lemon potatoes. He also had a baking specialty which was syrup-saturated, shredded kadaifi with a topping of whipped cream. In Turkish that delicacy was called, ekmec kadaif.

My sister Vasilea learned and perfected the baking of ekmec kadaif. It became her signature dessert, which she served at our Christmas dinners.

These were annual family events which included our parents and our assembled families. Imagine my fathers’ surprise and pride when he first bit into his serving of what was his specialty and which was now being presented by his daughter. The kitchen table was also where my sister and I studied and completed our homework assignments.

The kitchen range was where I had an activity where I melted down pieces of abandoned lead water pipes in a ladle. I poured the molten lead into a mold to cast miniature lead soldiers. It was a fun activity for me but one that my parents were not aware of.

Another interesting fixture in our kitchen was our two compartment, oak ice-box. This was before electric refrigerators became standard equipment for apartment dwellings. Our icebox stood about five feet tall and was 28 inches wide and 20 inches in depth. It had two impressive, raised panels, insulated oak doors with heavy exposed brass hinges and latches. The upper compartment is where a block of ice was placed. This ice was able to maintain a chilled temperature sufficient to preserve perishable food placed in the lower section of the ice-box for a week.

Obtaining a block of ice was yet another operation. The icemen made their rounds on Saturday mornings. The Italian iceman that serviced 35th Street ‘cometh’ on a canvas covered, horse drawn wagon loaded with large blocks of clear ice. Each block measured, four feet in length by 30 inches in width by 8 inches in thickness. On a typical Saturday morning, upon hearing the ice-mans’ bells, my father would call out from our living room window: “Paizan, a 20-cent piece for the third floor, front.” Some minutes later, the ice-man delivered and carefully placed the block of ice into the upper compartment of our icebox, waited, and received his payment on the spot.

During the winter months, our ice-box was used as a storage pantry. In its place we had a galvanized, sheet metal box which hung from our kitchen window. The box measured 30 inches wide by 14 inches high by 14 inches in depth. The box had two sheet metal sliding doors. Access to the box was by half opening the kitchen window. Our family’s perishable food purchases were seasonally adjusted in consideration of our cold temperature storage limitations.

Our apartment building was heated by a coal burning boiler which supplied steam heat to large cast iron radiators. There was one radiator in each room. In addition, there was a smaller coal burning boiler that provided our hot water. Both boilers were manually loaded by our Italian janitor. The boilers were loaded in the morning and again in the evening. Although we had heating and hot water, those comforts were not consistent during the day. Our bathing and washing had to be scheduled accordingly. Room temperatures varied greatly during the day. I can remember banging on a cold radiator with my leather shoe heel. Unfortunately, that call for heat went unattended since our janitor did not live in our building.

I look back at my life growing up in Astoria and realize how fortunate and blessed I have been to have lived that experience. I am now able to enjoy life as I know it today. I live in a comfortable home with temperature control and hot water 24/7. My home is located in a rural/bucolic environment out on the East end of Long Island that I share with my loving wife, Helen, who makes every day and every meal a wonderful experience.

PS: I almost forgot to explain the dumbwaiter in our kitchen. Here it is!

When our janitor made his evening visit to load up the boilers with coal, he would also collect garbage from each apartment. The dumbwaiter could be raised or lowered by pulling on the rope that looped over a pulley and was secured to the top of the dumbwaiter box. The pulley device was housed in a small penthouse on the roof of the building.

The janitor controlled the collection operation from the basement level.