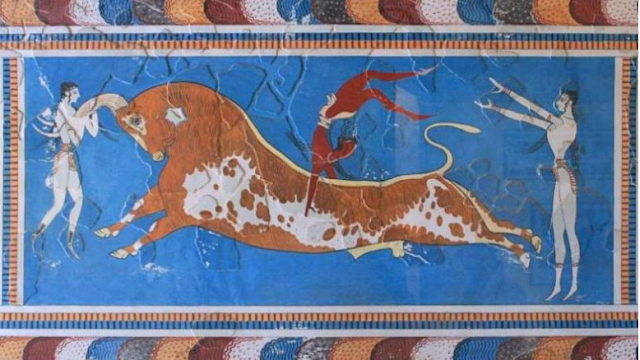 DNA ANALYSIS SHEDS LIGHT ON THE GENETIC ROOTS OF ANCIENT MINOANS AND MYCENAEANS  published on www.realmofhistory.com

In one of our previous articles, we talked about how the earlier Mycenaean artworks, architectural patterns and military arms, circa 1600–1450 BC, were very much similar to the contemporary Minoan styles. And now a comprehensive DNA analysis might just provide the credible context to this scope of maritime influence. To that end, according to a fascinating study conducted by an international team of researchers (with members from University of Washington, the Harvard Medical School and the Max Planck Institute for the Science of Human History, along with other archaeologists and collaborators) has revealed that the ancient Minoans and Mycenaeans were genetically quite similar.

Assessed from the remains of 19 different ancient individuals (from areas comprising what is now Greece, Crete and Turkey), this incredible genome-wide DNA sequence data also points to an interesting scenario where both the Bronze Age groups – Minoans and Mycenaeans, migrated from Anatolia, millennia before the advent of Bronze Age in the Mediterranean region. The pre-Bronze Age population comprised Neolithic farmers, and as such some of them also settled in southwestern Anatolia – thus alluding to a scope where genetically similar people resided in Greece, Crete and parts of Asia Minor. Furthermore the study also hypothesizes, perhaps unsurprisingly, that the modern Greeks in turn retain a fair share of the genetic similarities of their Mycenaean predecessors. Iosif Lazaridis, who contributed to the statistical genetic analysis of the data, said –

It is remarkable how persistent the ancestry of the first European farmers is in Greece and other parts of southern Europe, but this does not mean that the populations there were completely isolated. There were at least two additional migrations in the Aegean before the time of the Minoans and Mycenaeans and some additional admixture later. The Greeks have always been a ‘work in progress’ in which layers of migration through the ages added to, but did not erase the genetic heritage of the Bronze Age populations