The Greek Connection to The Green Book 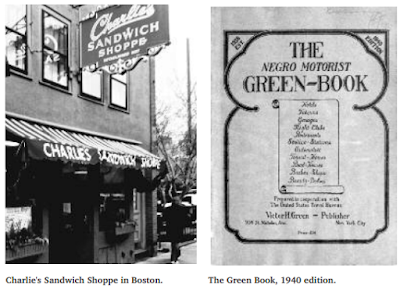 The Greek Connection to The Green Book

Published in The National Herald, January 26, 2019

NEW YORK – The award-winning film, The Green Book, was in part inspired by the Green Book, a guide to businesses across the United States that would serve African-Americans during the years of segregation. The Negro Motorist Green Book, its full title, was founded and published by New York City mailman Victor Hugo Green and was an important resource for African-American drivers from 1936 to 1967. Among the listings was at least one Greek restaurant which was included in a report on CBS Sunday Morning on January 13.

Greek immigrant Charlie Poulos and his business partner, Christi Manjourides, opened Charlie's Sandwich Shoppe at 429 Columbus Avenue in Boston in 1927 and served all, regardless of race. The restaurant was listed in the guide in 1947 and according to Damian Marciante, who bought Charlie's in 2017, there was some backlash, CBS Sunday Morning reported. "The original owners did not care. They just welcomed everybody. If you didn't like it, you didn't come in," Marciante said.

The Black Pullman Porters Union had its headquarters upstairs from the restaurant, CBS reported, adding that “the railroad workers spread the word about Charlie's even before it began listing in the Green Book in 1947.”

Among the jazz greats who visited Charlie’s was the legendary Sammy Davis, Jr. “He used to tap dance out in front of the diner,” Marciante told CBS Sunday Morning.

Working as the short-order cook, Christi Manjourides was the first employee at Charlie’s and bought half the restaurant from Charlie Poulos in 1946, the Boston Globe reported. The Manjourides family, siblings Arthur, Chris, Marie, and Fontane, ran Charlie’s restaurant until 2014, Boston magazine reported, noting that in 2005, “the James Beard Foundation bestowed the title of ‘American Classic’ upon the South End destination.”

Following the announcement of his and his siblings’ retirement from Charlie’s in 2014, Arthur Manjourides spoke to Boston magazine about the extraordinary history of the establishment. “There are so many stories within these walls. You never had to go to the movies or anything like that because there were so many characters. It was a very rough area for a long time. You’d never come down to the South End unless you were looking for trouble. We were open 24 hours a day, seven days a week for 36 years, Christmas dinner, you name it, we never closed. The busiest time was from one to three in the morning. We [served] mostly black entertainers like Duke Ellington and Sammy Davis Jr. This was all the way up until the ‘60s. Most hotels and restaurants would not serve black people. It was a very prejudiced town. I’d say 99 percent of our customers were black. Because we served the black community, a lot of white people wouldn’t come in. In the ‘70s, one of our regular customers had a sister come into town and she wouldn’t step into the place because we served black people. That’s not that long ago.”

Where Hash Rules: The Story of Charlie's Sandwich Shoppe in Boston by George Aaron Cuddy with photographs by Brooke T. Wolin was first published in 2012 and an updated version was produced in 2015 which included the 2013 visit of President Barack Obama.

The restaurant closed briefly following the Manjourides retirement and then reopened under new management in January 2016.

As CBS Sunday Morning reported, in the 1948 edition of The Green Book, Victor Green wrote, “There will be a day sometime in the near future when this guide will not have to be published. This is when we as a race will have equal opportunities and privileges in the United States."

The Civil Rights Act was passed in 1964, four years after Green passed away and though The Green Book was no longer published after 1967, it should not be forgotten.

Cultural historian Candacy Taylor, who has written a book about The Green Book due out in the fall, told CBS Sunday Morning, “It's so important that we look at the 'Green Book' not just as a historic travel guide, not as just something that we needed in the past, but for what the 'Green Book' teaches us about the resilience and the courage of what black people were able to do and accomplish, in spite of the circumstances, and everything that happened.”