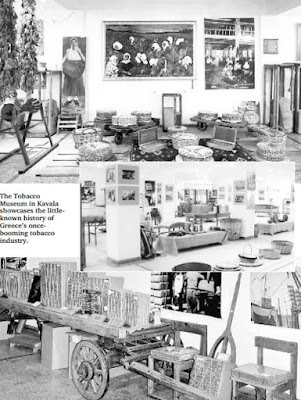 KAVALA, GREECE – Greece is in modern days is surely known for producing a number of local goods like feta cheese, Chios masticha, and the best olive oil in the world. But not many people know that the country was once host to a booming tobacco production industry.

In fact, in the 19th and 20th centuries, the economies of a number of Greek cities relied almost exclusively on the cultivation and sale of tobacco leaves, according to a Johns Hopkins University Press research paper by National Technical University of Athens Associate Professor Maria Renetzi.

In the Northern Greece city of Kavala, for instance, the tobacco craze went full cycle, from leaf picking, to drying, to processing tobacco, which was then transported from large warehouses to the local port where foreign ships awaited their precious parcels. According to Renetzi’s report, exports were mainly sent to the Hapsburg Empire and also England, Egypt, Russia, France, and the United States.

Tobacco production in the area dates back to the Ottoman occupation, when the sultan had forbidden Turks from growing the plant, thus exclusively handing over cultivation to local Greek merchants. As smoking became a growing trend among Greeks, the tobacco industry prospered, and Kavala became a tobacco-producing mecca and major export harbor.

The city soon attracted independent exporters and Greek bourgeoisie who invested in warehouses and trade, further strengthening the local tobacco production industry. By 1880, all the key European counties had established consulates in Kavala city, and by the end of the 19th century, around 4,000 tons of tobacco were being exported annually from the city’s port.

By 1913, Renetzi notes, a total of 61 tobacco companies were registered in the city, and close to 6,000 people were employed in the industry, though by the 1950s, new technological advances replaced old traditional ways of cultivation and production, which became more efficient in others parts of the world. And thus, the once successful tobacco industry of Kavala ceased to exist.

Though now long gone, the Greek tobacco industry’s rich past is today celebrated at the Tobacco Museum of Kavala. Unique in itself, the history of Kavala’s Tobacco Museum dates back before 2003 when it was officially opened to the public. It is hosted in a small section of an impressive historical building which formerly housed the Greek Tobacco Organization that served as a tobacco showroom since the 1970s.

Among most interesting things to see during your visit here are the tools and tricks of the trade, and if you’re lucky, you may catch a live show and see how smoke is made. The history of the Kavala tobacco industry goes beyond trade, from politics, to technological innovation, and even gender and women’s working history, as the companies at some point banned unionized men, preferring women instead. You can learn all this and more with a visit to the Tobacco Museum of Kavala.

And while in the city, you can journey through the world of Greek tobacco culture, visit the landmark buildings of the city’s historical tobacco warehouses and admire the Austro-Hungarian architectural gems that add a special touch to Kavala.

For more information on the Tobacco Museum of Kavala, visit tobaccomuseum.gr