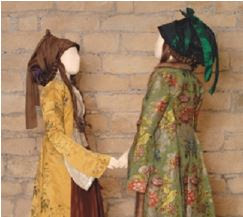 This looks fascinating.  I would like to spend a whole day there, but for now we can all take the 360 virtual tour which consists of 8 different sections - http://www.pli.gr/en/content/360-tour-v-papantoniou-museum

History of the Foundation

The “V. Papantoniou” Peloponnesian Folklore Foundation (PFF) is a privately supported foundation, based in Nafplion. It was founded in 1974, and its aim is the research, preservation, study and presentation of the material culture of the Peloponnese, as well as of the whole of Greece. It is housed in the residence of Vas. Papantoniou, which was converted into a museum in 1981.
This same year with its exhibition “The Production, Elaboration and Use of Natural Fibres in Greece” the Museum won the 1981 Museum of the Year main Award (EMYA) “...because of the manifold activities of the Foundation in the area of tradition, the quality and size of its collections, the excellence of its displays, the superb graphics, the range and scholarship of its research projects and the originality and thoroughness of its educational programmes”. It is the only Greek Museum has taken this award so far.
In 2013 PFF was honoured by the Academy of Athens for its long term contribution to the promotion of the Hellenic culture.
The library of the Foundation now numbers 12.000 books and 250 periodical publications, covering the fields of Ethnography, Museology, Costume, Dance, Theatre, Sociology, History, Arts and Children literature. It is a non lending out library.
Also, the arhives of the PFF contain rare material mostly of in citu research about costume, dance, folk songs etc.
The Peloponnesian Folklore Foundation publishes two original scientific journals, Ethnographica and Endymatologica.