The Book Nook: Yet Another Important Building in Greek American History 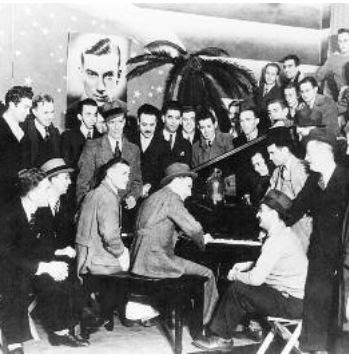 THE BOOK NOOK:
YET ANOTHER IMPORTANT BUILDING IN GREEK AMERICAN HISTORY

When the book on Greek-American Monuments is finally compiled a lengthy entry on the Book Nook in Bloomington IN must see inclusion. Through various archival collections, historical markers, public statues and other sustained preservation efforts it is clear Americans clearly recognize the importance of this structure, the actions of its various Greek owners and how their daily lives have had a lasting influence on the people and culture of southern Indiana. My account here is merely to make these local efforts known more widely.

Now among Greek-Americans there will certainly be those who know of the both the existence and contributions of the tight-knit Greek community that stretches across southern Indiana. My singling out the Book Nook from, say, the various other early Greek-owned establishments of Bloomington such as the Greek Candy Kitchen, Nick’s English Hut, or even the later presence of the Kerasotes ownership of the Von Lee Theatre could well be questioned. Nonetheless, as each book is composed of individual pages so must we progress in our presentation of Greek-American historical structure, one historic marker, statue, fountain, or other monument at a time. And given the close nature of the Greek community in Bloomington as well as the specific history surrounding the Book Nook it will be inevitable that we mention many of the local Hellenes and their extended kin.

The Book Nook still stands at 114 S. Indiana Avenue across from the Indiana University (IU) School of Law. In 1914, John L. Nichols, a local architect designed the building in the Spanish Colonial style. In 1919, George Poolitsan, owner of the Candy Kitchen on Walnut Street, purchased the Book Nook from C.D. Fetzer and C.W. Jewett, a former mayor of Indianapolis. Poolitsan died months later, and his widow sold the business to relatives Peter, George, and Harry Costas. It was during this period that the Book Nook gained a reputation as a student hangout hotspot which featured a soda fountain, book store and music. But what else would you expect? It was the Roaring Twenties! The Jazz Age of F. Scott Fitzgerald with its college fraternity men in their raccoon coats, hot “cool” jazz and dances like the foxtrot and the collegiate. The Book Nook soon known for its music and the sometimes rowdy behavior of its customers.

The Indiana University Archives (IUA) has an array of historic photographs of the events held at Book Nook as well as those of many of the most notable characters. Notable IU alum musician and composer Hoagy Carmichael was a frequent patron, and it is said he composed his most famous songs, Stardust, at one of the Book Nook booths. In his autobiography, Sometimes I Wonder (1965), Carmichael described the Book Nook as, “a randy temple smelling of socks, wet slickers, vanilla flavoring, face powder, and unread books. Its dim lights, its scarred walls, its marked up booths, and unsteady tables made campus history.

Herman B. Wells (IU grad and later president of the University) described a slightly less raucous establishment in his autobiography, Being Lucky (1980): “in my day it was the hub of all student activity; here student political action was plotted, organizations were formed, ideas and theories were exchanged among students from various disciplines and from different sections of the campus. For most of this period the Book Nook was presided over by something of a genius, Peter Costas, a young Greek immigrant who transformed a campus hangout into a remarkably fertile cultural and political breeding place in the manner of the famous English coffee houses. All in all it was a lively, exhilarating place (http://www.dlib.indiana).”

The Book Nook Commencement ceremonies have their own unique history: “The first Book Nook Commencement was held in 1927 for William Moenkhaus, a contemporary and friend of Carmichael. Moenkhaus was a leader of a group of students who called themselves the ‘Bent Eagles,’ known to spend a lot of time at the Book Nook.” Carmichael was also a member of the “Bent Eagles,” others included Bix Beiderbecke (cornetist), “Wad” Allen, Charles Bud Dant, and Ed Wolfe. Moenkhaus was often referred to as the “poet of Indiana Avenue” and was known to perform Dada poetry. When Moenkhaus was denied his diploma due to his refusal to take a required course on hygiene, the owners of the Book Nook George and Peter Costas worked with the Bent Eagles to put together the mock commencement. The Book Nook Commencement was certainly infused with the spirit of Dada; Moenkhaus delivered his speech wearing a bathrobe and holding a dead fish. “President” Peter Costas handed out degrees from the “College of Arts and Appliances.”

The Book Nook Commencements were increasingly elaborate productions, involving a parade from fraternity house to the Nook, absurd speeches, music, the conferring of fake degrees and diplomas, and “noise” by the “Book Nook Symphony Orchestra,” and “additional noise” by the “Concert Ya Book Nook Orchestra.” Students arrived attired in cone shaped hats and bathrobes. Some of the nonsensical degrees handed out included: Master of Hearts, Doctor of Physique, Doctor of Yell, Vociferatissimus, and Lord Mare of Hearts, Eroticus, Cum Laude. During the last Book Nook Commencement, Herman B Wells, then an instructor in economics, was presented with the degree “Doctor of Nookology.” Four Book Nook Commencement ceremonies were held, three between 1927-1929, and the last in 1931. In 1930, the depression caused many students to drop out, and the mock commencement was canceled. Although it was revived the next year, soon after the 1931 commencement the Depression again put a stop to the production (http://www.dlib.indiana.edu). ”

Without speaking of any of the other individuals mentioned as devotees of the Book Nook Hoagy Carmichael (1899-1981) and Bix Beiderbecke (1903- 1931) are two of the most revered musician/composers of the Jazz Age. Beiderbecke was one of the most influential jazz soloists of the 1920s. His turns on "Singin' the Blues" and "I'm Coming, Virginia" (both 1927), in particular transformed the genre. Yet it was Carmichael who is purported to have composed his signature song Stardust in 1927 at the Book Nook piano. In 1931, the Great Depression forced the Costas Brothers to sell the Book Nook. The children of George Poolitsan, Nick, Chris, Charlie, and Pete, and their sister Katherine Topolgus still owned the building, and re-opened it as a restaurant called The Gables. They ran it until 1968.

Today, a historical plaque stands out front of the building at 114 S. Indiana Avenue honoring the fact that Hoagy Carmichael composed his immortal “Star Dust” in this building. In 2008, a Hoagy Carmichael Landmark Sculpture was placed near the northeast corner of the IU Auditorium. It shows Hoagy composing Stardust on the Book Nook piano. More could be written about the Book Nook as well as the Greek community of Bloomington. Which is why more individuals should take up the task of researching and writing GreekAmerican history.