New Book Released on Genocide in the Ottoman Empire 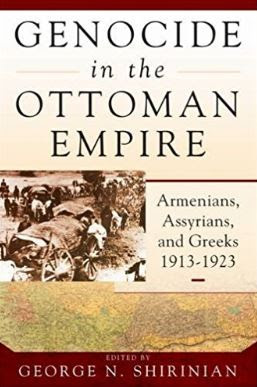 NEW BOOK RELEASED ON GENOCIDE IN THE OTTOMAN EMPIRE

GENOCIDE IN THE OTTOMAN EMPIRE -
Armenians, Assyrians, and Greeks 1913-1923

The Asia Minor and Pontus Hellenic Research Center (AMPHRC), based in Chicago, IL has released the sixth book in a series on the Genocide of the Greeks of Asia Minor, Pontos, and Eastern Thrace and of the Armenians and Assyrians.

Genocide in the Ottoman Empire: the Armenians, Assyrians and Greeks, 1913-1923 edited by George N. Shirinian includes the recommendation of the International Conference on the Ottoman Turkish Genocides of Anatolian Christians, which was held at the Illinois Holocaust Museum and Educational Center in May, 2013. The conference was the first without the late Dr. Harry J. Psomiades, the visionary, pillar, and benefactor of the Center. Shirinian, the book’s editor, is the Executive Director of the International Institute for Genocide and Human Rights Studies, a division of the Zoryan Institute. His publications include Studies in Comparative Genocide and The Asia Minor Catastrophe and the Ottoman Greek Genocide: Essays on Asia Minor, Pontos, and Eastern Thrace, 1913–1923.

AMPHRC Director George Mavropoulos spoke to The National Herald, welcoming the publication of the book and expressing gratitude to Shirinian, the writers and academics, who offer the reader and future historians the opportunity to realize that “the last years of the Ottoman Empire were disastrous for all non-Turkish, non-Muslim minorities.”

He noted that the new book shows that the Genocide of Armenians, Assyrians, and Greeks was perpetrated at the same time and recalls that the struggle for recognition of the Genocide is and should be shared.

Mavropoulos expressed his gratitude to all who helped and offered a donation for the publication of the book and said that “the book was released the week of the Diaspora celebrating the 196th anniversary of the Greek Revolution.”

He also noted that on the day of our national holiday at the Pontic Club in Astoria, GreekRussian businessman and one of the grand marshals of this year’s New York Greek Independence Parade, Ivan Savvidis, announced the donation of $50,000 from his family foundation for the continuation of the project for the study of the history of Asia Minor Hellenism and its great cultural contributions before and after the destruction of their ancestral homes.

This donation, Mavropoulos said, is the largest the Center has received so far to reward and reinforce its work.

Referring to the Genocide, Mavropoulos noted that from 1913 to 1923, the leaders of the Ottoman Empire deported, killed, or otherwise persecuted a large number of men, women, and children in an effort to maintain a “Turkey for the Turks” creating a modern precedent for how a system may implement a genocide against its own citizens for the pursuit of political objectives, while escaping the attention of public opinion entirely.

Although this brutal story is best known through the Armenian Genocide, very few today can appreciate the extent to which the fate of the Assyrian and Greek nationals were linked to that of the Armenians.

Mavropoulos said “this book will be introduced at university libraries and distributed to politicians and historians to increase awareness of the history and destruction of Hellenism in Asia Minor, Pontos, and Eastern Thrace.”

Among the chapters in the book is The Assyrian Issue 1914- 1935: Australian Documents and Press by Stavros Stavridis, Found in Translation: Eyewitness Accounts of the Massacres in Nicomedia as Reported by Greek Journalist Kostas Faltaits by Eleni Phufas, The Genocide of the Ottoman Greeks 1913- 1923: Myths and Facts by Thea Halo, and Redeeming the Unredeemed: The Anglo-Hellenic League's Campaign for the Greeks in Asia Minor by Georgia Kouta.

Note:  this book is available through several different sources including Amazon.com and AMPHRC The Asia Minor and Pontos Hellenic Research Center - http://hellenicresearchcenter.org/publications/genocide-in-the-ottoman-empire-armenians-assyrians-and-greeks-1913-1923/