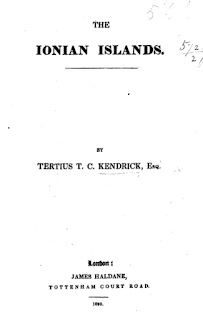 The book THE IONIAN ISLANDS by Tertius T.C. Kendrick, Esq., published in London 1822 is available to view online for FREE.


This book is an Englishman’s view of the Ionian Islands in the 1820s.  It is not always favorable to the Greek inhabitants but does give insight into the British view and their opinions that the Greeks living on these islands need the British there to help them be more civilized.  It gives you a feel for the type of prejudice your ancestors may have experienced in their own land.

I have included some excerpts from the Preface of the book.

“The character of the Septinsulars is faithfully described.  I have given no vent to personal dislike or prejudice:  a residence of some years amongst them, has given me an opportunity of judging accurately of their disposition, which is now altogether as bad as their worth in ancient time was great.  The almost Hottentot customs of the peasantry, are a striking proof of their masters character; and furnish an unequivocal demonstration of their neglect in exercising all humane and generous principles to forward an emancipation from ignorance and wretchedness.

The nobility and gentry of the Ionian Islands, require a firm-minded governor to keep them from manifesting those dangerous principles so destructive to small states in general; and to the excellent administration of Sir Thomas Maitland, the Islands are indebted for the preservation of civil order.  This skillful statesman perfectly understands the nature of these people, of their views and party quarrels, which he has checked by banishing the leaders.  The art and craft of the factious nobles have been employed to their highest pitch to raise reports which have only foundation in malice.  The priests, likewise instructed by the nobles, have infused opinions and sentiments of the most dangerous tendency into the minds of the lower class, who are incapable of discriminating with judgment.”

-----
Note:  Many in our Hellenic Genealogy Geek group have been interested in the "Libro d'oro".  I am including this excerpt for your information.

CHAPTER X.
“The French, on taking possession of the island, in their rage for republicanism, burnt the “Libro d’oro,” or golden book, wherein all the nobles names were inscribed, ordering it to be done by the common hangman.  Therefore, for a while, these distinctions were dropt; but, under the Russian government, they revived, and were again suppressed by the French in 1807.  Since which, the English have restored the book in high perfection.  The year 1817 proved auspicious for the counts; they came out, with all their former dignity, under shelter of the intended constitution. . . . Dirty half-starved men made their appearance on a sudden, to claim the right of hereditary honors. . . . “  (Note: the book has further stories of incidents that may be of interest.)