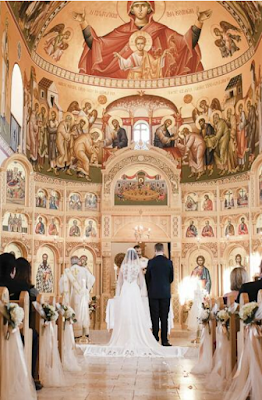 Note:  With information of the Evhologion and the Typikon (books) of the Church

The wedding ceremony of the Greek Orthodox Church is an ancient and evocative service by which a man and a woman are united together "In Faith, and in Oneness of Mind, in Truth, and in Love," acknowledging that their love is rooted in God, who is Love itself.

The marriage ceremony is abundant with symbols that reflect the basic and important elements of marriage:  Love, Mutual respect, Equality and Sacrifice.

The traditions observed have special meanings and significance.  These symbolic actions are often repeated three times stressing the belief in the Holy Trinity, in which God is represented as the Father, the Son, and the Holy Spirit.

In the Orthodox Tradition, the wedding ceremony is actually composed of two services.  The first is the Service of Betrothal, or Engagement ceremony, during which the rings are exchanged.  The second is the Service of Marriage or Crowning, during which prayers are offered for the couple, the crowns of marriage are placed on their heads, the common cup is shared, and the ceremonial walk takes place around the table.

The waiting for the bride

The father accompanies the bride to the entrance of the church, where the groom awaits with her bouquet.  The groom offers the bouquet to her, and takes her right hand after he father releases his.  Bride and groom then walk together down the aisle, the groom on the right side of the bride.  Waiting for them are the koumbaro and koumbara, who will exchange the wedding rings and the wedding crowns.

The Service of Betrothal (or Engagement/Espousal)

In this service, the priest begins by offering petitions of prayer on behalf of the man and woman who are being betrothed.  He then asks God's blessings upon the rings and proceeds to bless the bride and groom with the rings.  He does this three times in the Name of the Father and the Son and the Holy Spirit, first from the groom to the bride, and then from the bride to the groom.  The back and forth movement can be interpreted to mean that the lives of the two are being entwined into one.  Double wedding bands are used, since according to Old Testament references, the placing of rings was an official act indicating that an agreement had been sealed between two parties.  In this case, the agreement is that a man and a woman agree to live together in the fellowship of marriage as husband and wife.

The rings are then exchanged three times on the fingers of the bride and groom by the Best Man a further expression and witness that the lives of the two are being brought together.  The exchange signifies that in married life, the weakness of one partner will be compensated by the strength of the other.  Apart, the newly betrothed are incomplete, but together they are made perfect.

A final prayer is read which seals the couple's acceptance of the rings, and asks that this mutual promise of betrothal, officially given before the church, may prove in true faith, concord, and love.  The rings are then exchanged three times on the fingers of the bride and the groom by the Sponsor.  A final prayer is read, sealing the putting on of the rings,which then take on the added meaning that the agreement was sealed and that the marriage is being enacted by God Himself.  The couple is now engaged to be married before God.

The joining of the right hands

The Sacrament continues with the invocation of the Holy Trinity.  After petitions are offered on behalf of the bride, groom, and wedding company, three prayers are read which ascribe to God the institution of marriage and the preservation of His people through the ages.  These prayers portray humanity as one continuous fabric, in which is interwoven everyone from the first man and woman, Adam and Eve, to the present generation of believers.  The bride and groom enter into this fabric with the reading of the third prayer.

The Crowning of the bride and groom

The Crowning is the highlight and focal point of the Sacrament of Holy matrimony.  The priest then takes two wedding crowns, or Stefana, and blesses the bride and groom in the name of the Father, and the Son, and the Holy Spirit, and then places the crowns upon their heads.  The Koubaros or Koumbara then interchanges the crowns three times as a witness to the sealing of the union.

The wedding crowns, or Stefana, symbolize the glory and honor that is being bestowed on them by God during the sacrament.  The Stefana are joined by a ribbon which symbolizes the unity of the couple and the presence of Christ who blesses and joins the couple.  Through the crowns, the Christ establishes the couple as the King and Queen of their home, which they rule with wisdom, justice, and integrity.  The crowns used in the Orthodox wedding ceremony also refer to the crown of martyrdom, since every true marriage involves self-sacrifice on both sides.

The Common Cup and Reading from the Gospel

The crowning is followed by a reading of the Gospel, which tells of the marriage of Cana at Galilee.  It was at this wedding that Jesus performed His first miracle, changing water into wine, which was then given to the married couple, symbolizing a transformation from old into new and a passage from death into life.  In remembrance of this blessing, following the Gospel reading and brief prayers, a cup containing a small portion of wine is presented to the bride and groom.  The wine is blessed by the celebrant and offered to the now wedded husband and wife, and three times from a "common cup".

The common cup serves as a witness that from that moment on, the couple shall share everything in life, joy as well as sorrow, and that they will bear one another's burdens, the token of a life of harmony.  Their joy will be doubled and their sorrows halved because they are shared.  Whatever the cup of life has in store for them, they will share equally.

The celebrant then takes the arm of the groom and leads him and his bride around the table three times as an expression of joy.  The three-fold walk around the altar set up in the solea is seen as a religious dance.  In this respect it is an expression of gratitude to God for His blessings, and joyfulness at the receiving of those blessings.

As the bride and groom are led around the table three times, three significant hymns are sung.  The first speaks of the indescribable joy that Isaiah the Prophet experienced when he envisioned the coming of the Messiah upon the earth.  The second reminds us of the martyrs of the Faith, who received their crowns of glory from God through their crowns of glory from God through the sacrifice of their lives, and reminds the newlyweds of the sacrificial love they must have for one another in their marriage.  The third is an exaltation to the Holy Trinity.

The altar contains the cross and the holy gospel, and on each revolution, the couple kisses the cross that the priest holds.  The circular movement represents peacefulness and infinity, towards which the couple engages, the cross represents suffering, and the gospel represents the education of children to come.  The bride and groom take their first steps together as a married couple, and the priest represents the Church, leading them in the direction in which to walk.

Immediately after the sacrament bride, groom, koumbaros, and priests all sign the act of marriage.