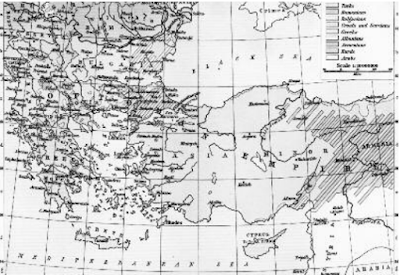 Published in The National Herald, March 2, 2019

This brief article will explain the action of one Greek-American who wanted to learn the fate of his brother-in-law, who was detained as a prisoner of war in Asia Minor. It will also be shown that there is clear evidence in Greek official sources supporting the argument for the existence of detained Greek prisoners in Turkey despite Turkish press denials.

In 1929, Louis Metaxas, a resident of Greenfield, Massachusetts, inquired into the fate of his brother-in-law Panagiotis Americanos. Allen J. Treadway, a Congressman from Massachusetts, wrote to the State Department and Near East Relief (NER) seeking their assistance in this matter. Metaxas pointed out in his letter to Treadway that his brother-in-law had resided in Greenfield from 1909-1920 and joined the Greek army in Asia Minor. He was captured by the Turks in 1922 and never returned to Greece. Metaxas heard that his brotherin-law was still held as a prisoner along with 300 other prisoners building roads and hoped both the NER and Red Cross could assist in getting him released. He provided the name of the contractor, Ali Bey, and an address in Ankara which could assist these organizations in tracing him. Metaxas does not provide any details as to how he learned about his brother-inlaw's detention and the contractor's name in Turkey.

In his communication with the NER, Treadway mentioned that Americanos’ citizenship status was unclear and the latter's prolonged absence from the United States would have led to its forfeiture. The Director of Foreign Department, NER, Laird W. Archer wrote to Treadway stating that this was a very difficult case as the NER no longer operated in Turkey, "having evacuated our orphanages, hospitals, to Syria, Greece and Egypt in 1923 following the Smyrna disaster." They had a person in Constantinople who knew nothing about such cases. It was suggested that if Americanos was a U.S. citizen then Ambassador Joseph Grew "whose standing in Turkey is quite high" could use his influence with the Turkish Government.

Another individual who could assist was J. Howland Shaw of the Near East Division, State Department, who was very knowledgeable on Turkish affairs, having formerly served in the Constantinople Embassy. Howland Shaw couldn't see how the U.S. Embassy could inquire when Americanos citizenship couldn't be established. Maybe the Greek Government could act upon the information possessed by Metaxas with the name of the unit in which his brother-inlaw served in Asia Minor. It was important that Metaxas' information match the records of the Greek Ministry of War. Then, the American Minister in Athens could be instructed to inquire into the whereabouts of Americanos.

There is no further correspondence on the fate of Panagiotis Americanos in the State Department files.

The Turkish Directorate General of the Press issued an official denial that Greek prisoners of war were still being detained in Turkey in January 1926. It asserted correctly that these inquiries were coming from Greeks in the United States who had written to their Congressmen seeking information on the whereabouts of their relatives in the recent Greek-Turkish war. The official denial meant "that it would not in future be expedient to follow up such inquiries."

The Turkish denial can easily be dismissed as the central archive of the Greek Foreign Ministry contain files closed to the general public regarding the detention of Greek prisoners of war in Asia Minor covering the years 1926-29.

There is a brief news item in the Athens newspaper Embros in March 1929 that it received reports from time to time of Greeks detained in Asia Minor. An unnamed Greek who managed to escape from near Ankara stated there were many surviving Greek prisoners who lived in terrible conditions. Embros argued that such serious claims needed to be investigated by a mixed commission composed of Greek and Turkish members which was already discussing outstanding issues pertaining to exchanges of populations and property under the Treaty of Lausanne. As far as I can ascertain, the question of surviving Greek prisoners of war was never discussed by this commission.

In conclusion, Ankara whitewashed the whole issue of Greek prisoners of war after 1926 and cannot deny the existence such individuals, as this can be found in official Greek sources. It would be interesting to see what the official Turkish sources have to say about this issue.

(This is part of a large project and any readers possessing letters, diaries etc. about their relatives detained in Asia Minor after September 1922, please contact the National Herald. Thank you.)
Asia Minor family history Genealogy Greek-American prisoner of war