A Poker Game Brought Him to Hawaii: George "Duke of Sparta" Lycurgus 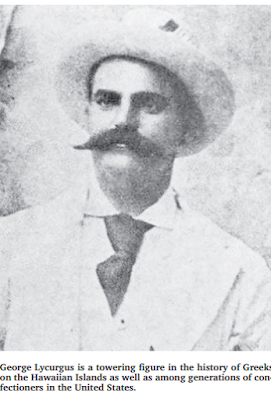 A POKER GAME BROUGHT HIM TO HAWAII:
GEORGE "DUKE OF SPARTA" LYCURGUS

CHICAGO - In every generation of Greeks there are always those who possess a mixture of shrewd business sense and flamboyant showmanship. Such Hellenes do not simply make a great deal of money but rather they must always do so with quite a considerable amount of noise and dash. True, many of these very same Greeks often go through cycles of economic boom and bust across the span of their lives but it seems this very prospect is what offers such individuals a challenge they cannot seem to resist. George Lycurgus was just such a person.

Lycurgus is a towering figure in the history of Greeks in the Hawaiian Islands as well as among (at least) two generations of confectioners in the United States. Known today as the Duke of Sparta, unexpectedly Lycurgus is figure better known to Americans than he is Greek-Americans. Lycurgus’ influential role in the early tourist industry of Hawaii has much to do this current state of affairs. That Lycurgus’ life also involves what is today a national park will surprise no one who knows even just a fragment of his life.

On March 5, 1859, George Lycurgus was born in the village of Vassara, Greece, near Sparta. Lycurgus accidentally came to Hawaii for the first time in 1889. In 1877, Lycurgus like so many of his generation, traveled in steerage class to New York City eventually working his way across the country. In 1881, a relative George Andreos, convinced him to join a wholesale fruit business trading between Hawaii and California – thus the California Wine Company was born. Lycurgus from roughly 1886 to 1889 owned and operated a restaurant, the Oyster Grotto, in San Francisco.

A man of unsuppressible energy, during this same period, Lycurgus shipped California produce and wine to his cousin in Honolulu, who shipped Hawaiian bananas to the mainland. In 1889, as the story goes, while loading a cargo boat that was bound for Hawaii, Lycurgus was invited aboard for a poker game. It must have been an exciting game because he didn’t notice that the ship had set sail with him still aboard it. While only spending a week in Hawaii on that first visit, in time Lycurgus took more trips and spent more and more time on the islands. In 1892, Lycurgus sent for his nephew Demosthenes Lycurgus, and along with other recent immigrants formed the Pearl City Fruit Company, then one of the largest exporting companies on the islands

In 1893, Lycurgus opened one of the first resorts on Waikiki beach in Honolulu which he named the "Sans Souci" (French for "without care"). Celebrities such as Robert Louis Stevenson stayed there and it soon became a popular destination for tourists from the mainland. Lycurgus was later quoted as recalling of Stevenson that, “He wrote mostly at night, filling dozens of pages with writing and scattering paper over the floor. He was always a gentleman; always ready with a story but yet apparently eager to listen to the tales of others.”

Among his most frequent guests was the Hawaiian royal family. Around this time Lycurgus received the nickname "Duke of Sparta." This was the title borne by the Crown Prince of Greece. This name was supposed to indicate not only Lycurgus’s friendship with the Hawaiian Royals but also his leadership role among the Greeks living in the Hawaiian Islands.

In 1893, after the death of Kalkaua, (November 16, 1836 – January 20, 1891), the last reigning king of the Kingdom of Hawaii American missionaries and businessmen (often the very same individuals) led the overthrow of the Kingdom of Hawaii and declared a Republic of Hawaii. By 1898, the Spanish– American War had increased American interest in the Pacific. In 1898, Hawaii was annexed as a territory of the United States. After the failed 1895 Hawaiian counter-revolution, Lycurgus was accused of smuggling guns to the Royalists. Various rebel leaders had meetings in the Sans Souci hotel. By January 20 the leaders were all captured. Lycurgus was arrested, charged with treason, spent 52 days in jail, but was never tried.

In 1894, Lycurgus landed in Hilo for the first time aboard the USS Philadelphia with the express intention of visiting the Kilauea and Mauna Loa Volcanoes for the first time. Some sort of shelter had always been near the volcano rim. In December 1904, George and Demosthenes Lycurgus became principal stockholders of the Volcano House Company and took over the management of the Volcano House. Two months after the Lycurgus’s acquired the business, the volcano erupted.

He opened a restaurant called the Union Grill in Honolulu in 1901 and would hold "Jailbirds of 1895" nights which were not popular with the new government. The Lycurgus family kept a shrine to deposed Queen Lili'uokalani at the Volcano House and related the legends of Ancient Hawaii to the visitors. Prayers were made to the fire goddess Pele, said to live in Kilauea, to provide spectacular eruptions. The American missionary class despised these practices.

Around 1912, The Lycurgus family raised money to build a small building next to the hotel for scientific instruments. In 1921 George Lycurgus sold the Volcano House and moved to Hilo, Hawaii. Yet Pele must have been calling for Lycurgus who bought back into the Volcano hotel in 1934 but even then the old Greek knew more must be done. In 1940, Lycurgus traveled to Washington, D.C. to lobby among influential friends (including Franklin D. Roosevelt who had stayed in the Volcano House) to have the Civilian Conservation Corps construct a park headquarters building near the Kilauea Volcano. Later the Lycurgus family proved instrumental in the development of the Hawaiian Volcano Observatory and Hawaii Volcanoes National Park.

In November 1941, Lycurgus opened his last version of the fabled Volcano House. Over the decades George Lycurgus had engaged in any number of promotional acts to increase tourism to Volcano House. These efforts included public announcements of Lycurgus’ claims to have tamed the volcano, to radio broadcasts from the Volcano House during nearby eruptions to his occasional tossing bottles of gin into the volcano as offerings to the Polynesian god, Pele.

George Lycurgus, wandering Greek, businessman, freethinker, loyalist to the Hawaiian royal family and irrepressible spirit died in 1960 at the age of 101. Various National Park publications such as “The Story of the Volcano House by Gunder E. Olson (Kinoole, Hawaii: Petroglyph Press, 1941) and “Uncle George of Kilauea: The Story of George Lycurgus” by Harry Miller Blickhahn (Volcano House, Hawaii National Park, 1961) offer something of this complex individual’s life. But clearly a more detailed historical account of this person’s experiences and contributions needs to be undertaken.

It has been said that George Lycurgus always exhibited, ho‘okuleana, which is the native word meaning “to take responsibility.” While often described as an “action word” signifying individual and/or collective responsibility as with all translations that is merely a gloss. The word is meant to indicate an individual’s ability to act properly, the way people are meant to participate in everyday life rather than ignore significant events around them. To prevent negative events rather than react and so to preserve rather than degrade, is meant here. In Greek we say, he or she “gave back more than they were given.” George Lycurgus, the Duke of Sparta, not only helped to preserve the natural world but in so doing he left the world a legacy beyond measure.