Imbros and Tenedos: A Study of Turkish Attitudes Toward Two Ethnic Greek Island Communities Since 1923 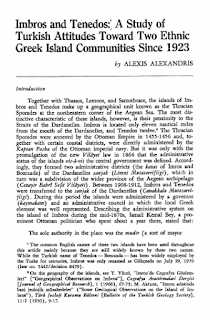 IMBROS AND TENEDOS:
A STUDY OF TURKISH ATTITUDES TOWARD TWO ETHNIC GREEK ISLAND COMMUNITIES SINCE 1923
By Alexis Alexandris

"Together with Thassos, Lemnos, and Samothrace, the islands of Imbros and Tenedos make up a geographical unit known as the Thracian Sporades at the northeastern corner of the Aegean Sea.  The most distinctive characteristic of these islands, however, is their proximity to the Straits of the Dardanelles.  Imbros is located only eleven nautical miles from the mouth of the Dardanelles, and Tenedos twelve.  The Thracian Sporades were annexed by the Ottoman Empire in 1455-1456 and, together with certain coastal districts, were directly administered by the Kaplan Pasha of the Ottoman imperial navy.  But it was only with the promulgation of the new Vilayet law in 1864 that the administrative status of the islands vis-a-vis the central government was defined.  Accordingly, they formed two administrative districts (the kazas of Imroz and Bozcada) of the Dardanelles sanjak (Limni Mutasarrifligi), which in turn was a subdivision of the wider province of the Aegean archipelago (Cezayir Babri Sefit Vilageti).  Between 1908-1912, Imbros and Tenedos were transferred to the sanjak of the Dardanelles (Canakkale Mutesarrifligi).  During this period the islands were administered by a governor (kaymakam) and an administrative council in which the local Greek element was well represented.  Describing the administrative system on the island of Imbros during the mid-1870s, Ismail Kemal Bey, a prominent Ottoman politician who spent about a year there, stated that:

The sole authority in the place was the mudir [a sort of mayor appointed by the government], who was a charming Albanian, and more like the father of this island than a representative of the Government . . .   There were four or five gendarmes recruited from among the Greeks of the country, who did not even find the need of using them - and it is doubtful if they would have known how to if the occasion had arisen . . .   There are no pleasures there except the songs of young Greeks and country dances." . . .

Additional sections of the article:

The Response to Turkish Occupation

The Reorganization of the Islands' Administration