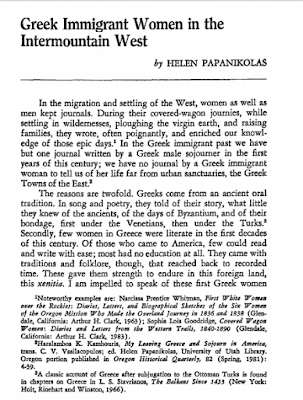 GREEK IMMIGRANT WOMEN IN THE INTERMOUNTAIN WEST
By Helen Papanikolas

Published in the Journal of the Hellenic Diaspora, Year 1989
Pages 16-34

"In the migration and settling of the West, women as well as men kept journals.  During their covered-wagon journies, while settling in wildernesses, ploughing the virgin earth, and raising families, they wrote, often poignantly, and enriched our knowledge of those epic days.  In the Greek immigrant past we have but one journal written by a Greek male sojourner in the first years of this century we have no journal by a Greek immigrant woman to tell us of her life far from urban sanctuaries, the Greek Towns of the East.

"The reasons are twofold.  Greeks come from an ancient oral tradition.  In song and poetry, they told of their story, what little they knew of the ancients, of the days of Byzantium, and of their bondage, first under the Venetians, then under the Turks.  Secondly, few women in Greece were literate in the first decades of this century.  Of those who came to America, few could read and write with ease; most had no education at all.  They came with traditions and folklore, though, that reached back to recorded time.  These gave them strength to endure in this foreign land, this xenitia.  I am impelled to speak of these first Greek women in the West before their immigrant experience is completely lost to history.

"In Western mining camps, smelter and mill towns, and in railroad terminals, often not one Greek woman lived among hundreds, even thousands, of men.  The young men and boys had come to fulfill the traditional burden that poverty placed on them; to provide dowries for their sisters and help for their parents.  This accomplished, they intended to return to the patridha, the fatherland.  America was exile to them.  Several men, though, brought their young wives with them.  They became the matriarchs of their people and were remembered with respect by those early immigrant men. . . . . "

You can read the entire article for FREE by CLICKING HERE