Mile High City Greeks: The Trials & Triumphs of the Early Greeks of Denver 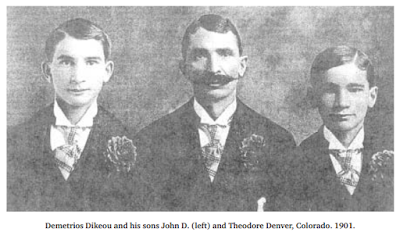 Between 1890 and 1900, Greek immigrants began to appear throughout the city of Denver with pushcarts and in elaborately appointed candy stores and shoe-shine parlors. As in other Greek communities the early Denver Greeks were also laborers in the mines, railroads, factories and smelters.

The Denver Greeks quickly established a system of support and solidarity that was simultaneously a money-saving living arrangement. “Some of the Greeks preside over popcorn stands at night, and the others run candy stores during the daytime. The popcorn men are home during the day and the candy men at night (Denver Times February 11, 1901).” Shared living quarters among large groups of men based on factory or work shifts was common all across Greek America. It is well recalled among Greeks, often with some degree of laughter, that with such shared-quarters ‘the beds never got cold.’

In Denver, this cooperative-housing arrangement eventually became the focal point of dispute and even lawsuits between two factions one that aligned themselves with George Allen and the other the newly arrived Stratus Coklanus (also spelled Cokanus and Coklanus in these news accounts). It is hard from this distance in history to really understand the core dispute between the two factions. Various news reports provide us clues but little else.

Interestingly, these very same news accounts unintentionally reveal the racism of the WASP journalists. Rather than attempt to understand the reasons these two factions had come into existence these selfproclaimed “gentlemen of the press” simply offer a wop-comedy. That these same American-born journalists living in Denver were as deeply oppressed by outside social and economic forces as the foreigners they so disdainfully describe--seems to have utterly eluded them.

“For months has the faction headed by Stratus Coklamus rebelled against the authority of George Allison, the present chief of the Greek colony…On several occasions was a combat narrowly averted. Yesterday a proclamation signed by Stratus Coklanus declaring himself mayor of the colony, and his brother Peter his lieutenant, was posted on a pole in front of the house of the Coklanus and their followers, in an alley at the rear of 1328 Larimer street.

It is here that the rebellious clan gathers when not roasting popcorn and peanuts. They plot and scheme against the Allison party, which is located in the heart of the city and is far more prosperous and influential than the rebels.

Hardly had the news of the proclamation reached the ears of the Allison clan before its first lieutenant, Nicholas Constantine, a 6 foot 3 inch giant, with a heavy black mustache, was sent to investigate. He had orders to tear down the proclamation. Hardly had he reached the alley before the alarm was sounded and the whole neighborhood was aroused. Before he managed to escape he was severely beaten with corn poppers, coal shovels and pans. He ran from the alley to the police station, followed by the angry and excited Greek populous (Denver Times February 4, 1901).”

Obviously, taken in isolation, these accounts do not carry the same tenor and array of meanings as when they first appeared in print. Other items of public news served as a background to these accounts.

The average WASP American reader of the daily press began to see report after report of strikes, falling wages and bank panics, along with innumerable reports of foreigners taking jobs from ‘real’ Americans. Another news story of growing frequency was the appearance, seemingly out of no where, of literally hundreds of Greek laborers. As we see with: “A coach load of Greeks, sixty-six in number, who have been working on the grade of the Colorado and Wyoming road up the river; left this morning on the Rio Grande for Crestone, in the western part of the state, to work on the Rio Grande and Sangre de Christo road, now in course of construction (Denver Times February 28, 1901).”

In 1840, nine out of ten Americans lived on farms. In the twenty years between 1880 and 1900 half of that number had moved into the cities. This means that as the Greek and other immigrants of the 1880 to 1920 era arrived in American cities they were met by rural native-born Americans who had just themselves entered this new environment. By 1900, in Colorado the population was more or less evenly divided between native-born and foreign laborers.

The average Greek immigrant also had a daily reality we must be careful not to ignore. Deadly working conditions and meager wages were the norm. The vast majority of these young Greeks were alone or in very small groups, often for the first time in their lives. Alone or few in numbers these Greeks were in a foreign country where unprovoked physical attacks against Greeks (as well as other foreigners) were everyday events. With few or no Greek women and only the occasional traveling Greek priest, diplomat or intellectual these working men faced unprecedented spiritual and psychological pressures as well as all the other forms of daily physical hardships.

Once seen in this light it is not difficult to understand why these men might not snap at those closest to them, from whom they expected more understanding and compassion. That these Greeks, for the most part, faced down these new and unanticipated pressures provides us with the Hellenic Community we are now able to enjoy. Learning more of the early beginnings of Denver’s Greeks reveals not just the nature of the challenges they were required to overcome, but also their methods of engaged resistance.

It is also important to recognize that the Greeks of Denver were not at all times and circumstances fighting the world around them. Times of celebration, laughter and relaxation were most definitely a part of daily life. How we learn of these occasions is still often embedded in the harshness of the times. Under the headline “Deportation of Greeks,” we learn that “Five Greek musicians were started from here [Denver] Monday to be deported. They are charged with violating the immigration laws.”

I have to admit it is difficult for me to read some of these early newspaper accounts. The racism and sheer hatred are sometimes overwhelming. Also the fundamental stupidity. The Wasp journalists never seem to comprehend that it is the rich elite who are bringing all the foreign laborers to American shores. That it is quite literally the agents of J.D. Rockefeller, J.P. Morgan and the other ‘Robber Barons’ who intentionally replace one ethnic group with another to keep all the general wages low.

In the face of what can only be called class manipulation the Ku Klux Klan soon came to control the city of Denver and eventually the state. It was into this existing social scenario that the good Rev. Father Isaias Paschopoulos enters.

Stories and memories of this man abound. Here is one account of a commonly told story.

Local Denver Man: “Isaias stood up [to]…the Klan [which] was very powerful in Colorado and in fact all the states that went across the middle of the U.S… in Ohio, Indiana, up into Wisconsin, and Missouri, not in Kansas so much but in Colorado. And they were persecuting the Greek restaurateurs, they were harassing the waitresses who worked for them, and so he, actually, made an appointment with the police chief, the governor of Colorado, and the mayor. And he showed up with two pearl-handled pistols under his rassa (robes)."

LDM: “Yes, he did. He said, “My people are being persecuted and it’s going to stop.” And the Mayor, Stapleton [Benjamin F. Stapleton, was the mayor of Denver, Colorado for two periods, the first from 1923- 1931 and the second from 1935- 1947. He also served as the Democratic Colorado State Auditor from 1933-35], who it later emerged was a Klansman [see Stapleton’s www.wikipedia.com entry to confirm this claim] said to him, “What do you mean Father, nobody is harassing your people.” [Father Isaias] pulled open his rassa, and showed him his pistols, and said “I mean it’s going to stop.” And it did stop.

But the City Council passed a law [soon after this event] against people wearing strange and bizarre costumes on the street that might cause traffic accidents. So the parish council, at Assumption [today, Assumption of the Theotokos Greek Orthodox Metropolis Cathedral of Denver], decided that it was time for them to get control this guy. So the council was going to meet and they were going to tell him that he had to shave.”

LDM: “Oh, yeah, oh yeah. So, he came into the hall and there was an oak table with great big round legs on it, on a stage. He reached up and grabbed one of the legs and lifted the table up, sat it on the floor and sat down at it and said “who is the barber, who is going to shave me?” So, for the rest of the time he was there, he was in control of the community.”