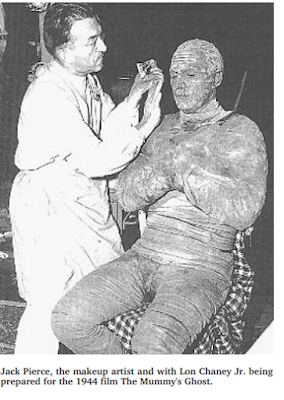 BETWEEN SILENCE AND SOUND:
THE FIRST GREEK ACTORS AND ACTRESSES OF HOLLYWOOD

Greeks were an active part of the American film industry even before such an industry was established. Documents exist about the involvement of Greek immigrants in the Edison laboratories as well as purchasers of Thomas Edison's first line of kinetoscopes. Kinetoscopes and similar machines were the first viewing machines seen in nickelodeon parlors. As many among Greek-America's senior generation will recall, Greek immigrants were actively involved in the advent of local nickelodeons, which led to their purchasing vaudeville and moving picture theaters. That said, trying to authoritatively identify Greek actors in early Hollywood, during the silent film era, is extremely difficult. To be sure individuals such as Jack Pierce, George Kotsonaros, George Regas, and his brother Petros are well-recognized as among the earliest reliably documented motion picture actors. Yet, with the sole exception of Jack Pierce, the other actors did not begin their careers until the mid-1920s.

Between 1894 and 1910, three dozen short films were made by the earliest film companies and inventors: the Edison Company, American Mutoscope, Biograph Company, the Lumiere Brothers, Georges Melies, and Essanay Studios. Few of those first ventures into film had a storyline, as we understand them today, but were rather simply images of common events and so were named as such: The Kiss, The Sneeze, and so on. Among Greeks living in Chicago, rumors have circulated for decades that Greek immigrants worked at the Essanay Studios, including as character actors. Essanay was founded in 1907 in Chicago by promoter George K. Spoor and silent film actor Gilbert M. Anderson, originally as the Peerless Film Manufacturing Company. On August 10, 1907, the name was changed to Essanay ("S and A") after the first initial of their surnames. Although in 1912 Essanay issued the film, Nepatia, the Greek Singer, no print of the film now exists, and the available print reviews make no mention of ethnic Greek actors in that early motion picture. No documentation appears to exist, therefore, substantiating those rumors.

Nonetheless, various writers attribute the first viewing of those short motion pictures in a vaudeville theater to Alexander Pantages (1867-1936), one of the earliest and most successful of the Greek immigrant impresarios in North America. Pantages owned dancehalls during the Yukon Gold Rush, and then vaudeville theaters. Ultimately, he created the largest and powerful circuit of independentlyowned vaudeville and movie theaters in the Western United States and Canada. Pantages eventually sold the majority of his theater chain, before the 1929 stock market crash, to RKO (Radio-Keith-Orpheum) Picture Studios. Today, many of those movie palaces still bear the name Pantages and have been refurbished. Some remain theaters and others cultural centers, and can be found in Fresno, CA (now known as Warners Theatre); Hollywood, CA; Minneapolis, MN; Tacoma, WA; Salt Lake City, UT, and the Canadian cities Toronto (now known as the Ed Mirvish Theatre) and Vancouver. All that says nothing for the other local theaters scattered across the United States, Canada, and Mexico once purchased or built and owned by Greek immigrants, which have also been restored as landmark buildings. Again, that kind of heavy concentration of Greeks in the promotional end of motion pictures and their involvement in the technical fields necessary for this industry have never been systematically assessed.

The 1927 musical The Jazz Singer was the first featurelength motion picture with synchronized dialogue sequences. With the release of this film, the commercial ascendance of the "talkies" and the decline of the silent film era began. Between 1894 and 1927, then, there appear to be some 12 actors said to be Greek. Aside from the aforementioned, the remaining ones are: Peter Kanellos, Nellie V. Nichols, Luiza Ralls, Lloyd Pantages, Elene Aristi, and Demetrios Vilan. 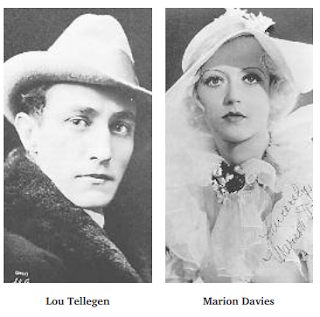 Two other actors reported to be Greek are Marion Davies (1897-1961) and Lou Tellegen (1881-1934). Davies is widely, and falsely, classified as Greek because her father’s last name, Douras must have sounded Greek to someone (both her parents were natives of Ireland). Tellegen, on the other hand, is often reported as having been half-Greek, half-Dutch, though extensive accounts refer to him as Greek.

The ongoing appearance of ethnic Greek and individuals of Greek descent along the edges of Hollywood is worthy of sustained independent study. Certain persons such as Belle Kanaris Maniates, whose books and screenwriting abilities warrant more attention, appear as one would expect in various news accounts of the early 1900s. John Pialoglou (1893- 1959) an extremely prominent tobacco importer, was married to silent screen starlet Constance Talmadge (1898-1973) and their two-year marriage (and especially her antics during this period) were the fodder for countless news accounts. Also, in any consideration of Greeks and how Americans perceived them along the fringes of Hollywood Carmen Pantages, daughter of Alexander Pantages, in her youth was a well-known figure in ongoing news stories of an array of movie stars and starlets.

As far as public documents now report, Jack Pierce was the first Greek to appear in Hollywood films. While there is a huge gap between what is said Pierce claimed concerning his acting roles and what is now the public record, this is what is undisputed: Pierce is credited with appearing as an actor in nine silent films, inclusive of short features and feature length films: Misjudged (1915); The Dupe (1916); Law and Order (1917); One Dollar's Worth (1917); The Enchanted Kiss (1917); The Man Who Waited (1922); Riders of the Law (1922); The Gambling Fool (1925); and The Speed Demon (1925). Yet Pierce, no matter his desires or dreams, was never destined to become an actor. Today, Jack Pierce is immortal as the makeup artist who created the film images for Dracula (1931), Frankenstein (1931), The Mummy (1932), The Invisible Man (1933), The Bride of Frankenstein (1935), The Wolfman (1941), and a host of other movie monsters.

In Part 2, more information will be featured on the film roles and broader careers of the other nine Greek American actors whose careers spanned the cusp from silent films to the era of sound in Hollywood movies.