Book Review - "The Immigrant" the story of Chrysostomos Chrisostomides 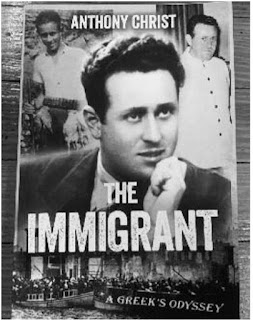 The Immigrant: A Greek’s Odyssey by Anthony Christ tells the story of the author’s father, Chrysostomos Chrisostomides, who was born and raised on the island of Imbros which became a part of Turkey following the Treaty of Lausanne in 1923. The treaty also guaranteed a special autonomous administrative status for Imbros and Tenedos to accommodate the Greeks, and excluded them from the population exchange that took place between Greece and Turkey, due to their presence there as a majority.

Later known as Chris Christ after immigrating to the United States, Chrisostomides lived through a harrowing time period, but managed to achieve the American dream in spite of the challenges he faced.

The author incorporates many facts about the Greek genocide of the late nineteenth and early twentieth century, though few people at the time recognized or defined what was going on in Asia Minor as genocide. Maps included in the book give a sense of where Chrisostomides grew up which was also where His Eminence the late Archbishop Iakovos of North and South America and the current Ecumenical Patriarch His All-Holiness Bartholomew were also born and raised. Chrisostomides actually knew the future Archbishop who was a few years older than him and whose words about Chrisostomides are included in the book as the preface.

From his days on Imbros to living with his aunt and uncle on Samothrace, returning to Imbros and then going to Constantinople to find work and eventually becoming a waiter, learning French, and serving the “Father of modern Turkey” Mustafa Kemal Ataturk, Chrisostomides’ dream from early on was to go to America. Like so many other immigrants, the path was not exactly smooth, but he eventually realized his dream through working for the Turkish ambassador in Washington, DC, though when a certain document was required for his immigration, the ambassador let him down.

Once his immigration status was sorted out, Chrisostomides’ immigrant story follows the familiar path most Greek immigrant stories follow. Years of hard work and a dedication to his family fill his remaining years and he eventually runs into his fellow Imbros-natives again along the way, Archbishop Iakovos and His All-Holiness Ecumenical Patriarch Bartholomew, who notes that the Chrisostomidis sisters used to babysit him on Imbros.

The family stories shared in the pages of this book are certainly a fine compilation for the Chrisostomidis family to remember their immigrant roots, though the reliance on telling and not showing creates an intrusive, almost uncomfortable quality, like eavesdropping on a man’s life.

A charming section of the book is devoted to an interview between Chisostomides and his young grandson which is perhaps more interesting for what he does not reveal about his past than for what he actually tells the boy. Like so many of those generations of the past, Chrisostomides does not speak openly about the traumas that shaped his life and indeed the life of all his family members and the subsequent generations. It is a tragedy that so many members of the Greek community went in silence to the grave without ever sharing the story of their lives, though maybe they meant to spare us the terrible truth about the traumas they experienced.

Book is available on Amazon.com