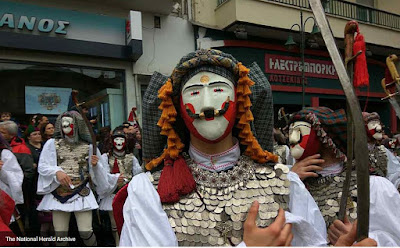 The National Herald published an article titled "Greece Adds 16 Traditions to UNESCO Heritage List" in the September 12, 2020 issue.
Sixteen Greek traditions ranging from Lent events to tobacco processing and site-specific techniques of cultivation were approved for inclusion in the national intangible cultural heritage list, part of UNESCO's effort to record practices and find ways of passing them on to newer generations.
The 16 entries were approved by the Culture Ministry earlier this month, and include diverse and often little-known practices. A selection follows:
- Janissaries and Boules, a pre-Lent tradition of Naoussa, with the mock courting of a woman - all played by disguised men and dancing through the city to bring a good and prosperous year.
- Mesosporitissa tradition, a special service on November 20 in honor of the Virgin Mary (a day before the Presentation to the Temple feast) at a small church in Elefsina, followed by the distribution of a semi-sweet bread and a porridge of seeds, reminiscent of the Mysteries held in the same area within the archaeological site of ancient Eleusis.
- The use of a network of traditional windmills in the Lassithi plain in Crete, a very efficient way of pumping water to cultivation without waste, now maintained as a landmark.
- Lefkadian knives, made on the Ionian island of Lefkas with techniques taught by Venetian occupiers (1684-1789); a tradition being currently revived.
- Feast of Agia Agathi, in Etoliko that lasts 5 days and nights and recreates the era of the Greek Revolution of 1821. On August 23, men dressed as fighters parade with their horses before everyone ends up dancing to Roma musicians through the night.
- Fishing with 'stafnokari', also at Etoliko. A traditional boat for shallow waters uses an umbrellalike construction with a net to fish in the nearby lake. The tradition is also an example of fishing sustainably through the generations.
- Cultivating and processing of Eastern tobacco strands in Macedonia and Thrace, a substantial activity in the region that brought prosperity to the area and gave rise to prosperous urban centers.
- Ceramic tradition of the Kourdzis family from Agiassos on Lesvos, which is recorded as far back as 1820. Through nearly 200 years and 6 generations, the family has seen at least 40 craftsmen specializing in production and decoration of pottery.
The process of including such traditions begins every January in Greece, with the Culture Ministry's Division of Modern Cultural Heritage issuing a public invitation. Communities are responsible for proposals, which they then process with a committee of experts and the ministry.
All three are involved in the recording and strategies of protecting the traditions.
"Intangible cultural heritage comprises our collective identity," Culture Minister Lina Mendoni said earlier in August. "Since 2008, Greece has registered 39 entries on the national list. The addition of another 16 proves the importance we give to protecting oral traditions and expressions in social and celebratory events, and in knowledge related to nature and technology related to traditional craftsmanship."
Greek family history Greek Genealogy Greek heritage Greek traditions