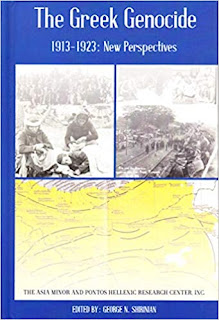 For those interested in the history of the Greek Genocide, the Asia Minor and Pontos Hellenic Research Center, Inc. (AMPHRC) has published a new book, titled The Greek Genocide 1913-1923: New Perspectives, edited by George N. Shirinian. A valuable resource, the book includes the insights of contributors from various backgrounds on these pivotal ten years that changed the course of history for not only Greece, but for the entire world.

The deportation, mass killing, and ultimate expulsion of subjects of the Ottoman Empire of Greek ethnicity during the waning years of that empire and its transition to the Turkish Republic are well-documented, but perhaps not widely known. The numerous archival sources and secondary works cited in these carefully researched studies are a rich source of evidence and testimony, many not available in the English language. This collective research by a group of scholars, young and old, from various countries and ethnicities, strives to delve more profoundly into this history, to explore new aspects of it, to broaden our knowledge of what happened, and to deepen our understanding of its significance.

As the title states, the book seeks to provide new perspectives on the Genocide of the Greeks in the Ottoman Empire. The publication of this book is the most recent in a series of efforts by the Asia Minor and Pontos Hellenic Research Center, Inc. (AMPHRC), a nonprofit organization whose mission is to research and document the history of the Greeks in Asia Minor, Pontos, Eastern Thrace, and their Diaspora. The book's title, The Greek Genocide, 1913- 1923: New Perspectives, describes its aim and its contents. As the AMPHRC has already published several books of original research related to the Greek Genocide, the intention was that this new publication should offer the latest information and insights into the ten year period of the Genocide.

The first part of the book focuses on the Genocide and its Documentary Sources and begins with Mapping out the Turkish Documents on the Unweaving of Greeks from the Black Sea (the Pontic Genocide, 1919- 1923) by Serdar Korucu and Emre Can Daglioglu and continues with The Roman Catholic Accounts Testifying to the Pontic Greek Genocide by Theodosios Kyriakidis, and The Legal Structure for the Expropriation and Absorption of Armenian and Greek Wealth in the Ottoman Empire and Turkey by Ümit Kurt.

Also in Part I, The Deportation of Greek Prisoners of War and Interned Civilians, 1922-29: An Untold Story by Stavros Stavridis who acknowledges the generous funding of the Savvides Foundation and the AMPHRC. Stavridis also acknowledged George Mavropoulos, AMPHRC President, for encouraging him to undertake a little explored subject in Modern Greek history, and noted that “I hope this paper will encourage a new generation of scholars to undertake further research into the Greek prisoners of war and interned civilians in Anatolia.”

Part II focuses on the Western Responses to the Genocide and begins with British Perspectives on Turkish Atrocities in the Former Ottoman Empire, 1919- 1922: The Great Catastrophe by Elisabeth Hope Murray and Amy Grubb. American Emergency Relief to Greece, 1918-1923: An Overview by Nikolas Misolidis rounds out the section.

Part III explores the Psychological Responses to the Genocide by the Victims and includes the chapter Mass Suicide during the Greek Genocide in the Ottoman Empire, 1913-1923 by Hasmik Grigoryan.

Available online, the book also includes illustrations and photographs from the period to highlight the history.