1914: The Hellenic Genocide in the Danish Archives 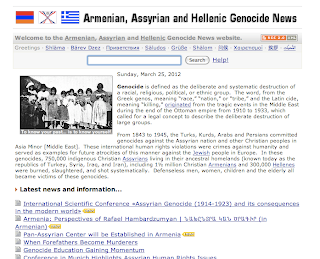 This article was published in the Armenian, Assyrian and Hellenic Genocide News.

"The official Turkish position on the 1915 genocide is that no such genocide has taken place, whether it relates to Greeks, Armenians or Assyrians. A multitude of documents, however, demonstrate the resolve of the Young Turks to rid themselves of the Christian minority and build a new Turkish state.

A large number of this evidence consists of reports by foreign missions (consulates and embassies). Some reports such as those of Mortgenhau, the American Ambassador in Constantinople in 1915, are very well known. There are others, which have not been published yet. The Danish Consul in Smyrna has written the following reports in 1914.  These letters have been inscribed in English.


These letters alone do not constitute proof of the Hellenic Genocide in Minor Asia. However, there are already many documents and reports which substantiate the claim that a genocide took place. New evidence simply strengthens the thesis that the Young Turks have conducted a planned genocidal campaign against the Greek minority of the Empire." . . . . READ MORE