Searching for Their Stefana: Locating My Grandparents Marriage Records by Mary Papoutsy 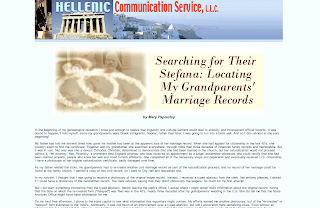 "Searching for Their Stefana:  Locating My Grandparents Marriage Records" was written by Mary Papoutsy and posted on her website Hellenic Communication Service. L.L.C.  in March 2009.

Mary covers all her frustrating steps, and the many "clues" she discovered along the way.

Here is an excerpt from the beginning of her article:

"In the beginning of my genealogical research I knew just enough to realize that linguistic and cultural barriers would lead to sketchy and inconsistent official records. It was bound to happen, I told myself, since my grandparents were Greek immigrants. Sooner, rather than later, I was going to run into a brick wall. And so I did—almost at the very beginning!

My father had told me several times how upset his mother had been at the apparent loss of her marriage record. When she had applied for citizenship in the late 40's, she couldn't seem to find the certificate. Together with my grandfather she searched everywhere, through more than three decades of American family records and memorabilia. But it was in vain. Not only was she a devout Orthodox Christian, determined to demonstrate that she had been married in the church, but her naturalization would not proceed without it. Her attorney, Max Pinansky, a prominent New England attorney who later received an appointment as a judge, assembled witnesses who could testify that she had been married properly, people who knew her well and could furnish affidavits. She completed all of the necessary steps and paperwork and eventually received U.S. citizenship. I have a photocopy of her original naturalization certificate, badly damaged over time.
As my father related the story, my grandparents had to re-create another civil marriage record as part of the naturalization process, and no record of her marriage could be found at the family church. I wanted a copy of this civil record, so I went to City Hall and requested one.
In my naivete, I thought that I was going to receive a photocopy of the original ledger record. Instead, I received a typed abstract from the clerk. Not entirely pleased, I asked if I could have a photocopy of the handwritten record. The clerk refused, saying that they didn't photocopy the ledgers. So much for my first attempt."

Greek Research How To Marriage Records