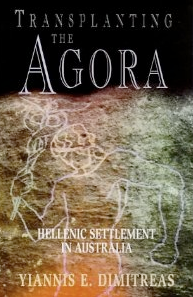 You can view the following on the page below:
106 names mentioned in this book
Table of Contents
Synopsis from the dust jacket

NAMES MENTIONED IN THIS BOOK

Alexander, Peter - From Cyprus, arrived in Australia 1923, excerpts from 1987 interview

Anastassiou, Jim - From Cyprus, immigrated to Australia, member of Building Workers Industrial Union, narrative on his role in fight for abolition of Australian immigration dictation test

Andreaki, Maria - Photo - at Port of Pireas with family prior to departure for Melbourne Australia on ship Flaminia in June 1959.  Photo - Christmas celebration 1959 at Melbourne Commonwealth Government clothing factory.

Andronicos, Emanuel - Referred to in the introduction of the first Hellenic book in Australia, 1916, as contributors to publication "Life in Australia", narrative on their comments regarding how Greeks in Australia should avoid political conflict

Andronicos, Kosmas - Referred to in the introduction of the first Hellenic book in Australia, 1916, as contributors to publication "Life in Australia", narrative on their comments regarding how Greeks in Australia should avoid political conflict

Emellen, Nicholas - From Athens, one of the first officially recorded Greeks to arrive in Australia, landed in Melbourne 1850, arrived as teenager, married Irish woman, had three children

Grambas, Yiannis - Excerpts from interviews regarding his immigration to Australia after World War II and Australian immigration policies

Notaras, Chrysanthos - Referenced as author in 1700 of "Introduction to Geographical and Spherical", which shows two-thirds of the Australian coastline

The causes of Hellenic migration

Social mobility and political behaviour of Greeks in Australia

Following is the synopsis from the book cover:

“Transplanting the Agora explores the Greek experience in Australia.  Starting with the first Greek migrants who arrived in the mid-nineteenth century, it outlines the reasons for migration, with particular emphasis on the peak period of Greek migration after World War II.  It analyses the role of Australian immigration policies, and public attitudes towards Hellenes on their arrival.

Yiannis Dimitreas acknowledges the difficulties faced by migrants in establishing themselves in a new country and the effects of discrimination, showing how some groups have fared better than others.  He explores Greek participation in the political movements which became the driving force of Australian multiculturalism, and the Greek contribution to the broader Australian community.

Greek migrants brought with them well-established patterns of community life and powerful cultural traditions.  Dimitreas argues that the cultural capital derived from Greece’s historical and mythological past has been central in the development of an Hellenic-Australian identity.”